Last week over in Pernem at the railway station ..

I was chatting with a pair of ladies leaving Pernem for New Delhi .. both of Indian origin both living in the U.S. .. a mother and a daughter .. mother was  a very senior and the daughter probably in her 60s .. mother lives in New York City and daughter lives in San Francisco .. Vernal Heights ..

So we had a lot to chat about after I learned they too were going to board coach A1 (my coach next Wednesday) on Train Number 12449 (my train also) .. and I lived in San Francisco for about 33 years ..

Somehow .. I can NOT recall just exactly how .. we got on OLIVE OIL .. and I told them the brand of olive oil I had gotten here in Arambol .. CIRIO .. $5.80 U.S. Dollars for 250 ml .. expensive .. and good .. I REALLY LIKE IT.. extra virgin first cold extraction in a DARK GREEN BOTTLE the Italian company dating to 1856 .. having traveled in Italy and in Greece I do know something about olive oils ..

I just kept my mouth shut .. BUT I thought-my-thoughts !

And I think that I LUG around too much weight .. I can NOT grasp lugging around six or so full one litre bottles of olive oil all over India !

Such a deal he couldn't believe ..

So off I went and I purchased my full one litre bottle of extra virgin olive oil ..

Now back to OLIVE OIL SNOBBERY ..

This will slay you.. I smile just thinking of it ..

The one litre bottle of olive oil has a brand name ..

And the olive oil in the LASER brand bottle is in a clear transparent  bottle NOT in a dark green (proper) bottle ..

Now IF I had told the lady at the train station over in Pernem about the LASER brand olive oil.. in a clear glass bottle .. with NO heritage .. costing only $10.23  a full litre .. I would have fully understood her SNOBERY ..  but not over my PREMIUM CIRIO brand ..

BUT it looked good and the label stated that it was a first cold extraction .. extra virgin olive oil will be DARK in color .. so evidently the LASER executives WANT you to see their DARK olive oil in its clear bottle so NO dark green bottle ..

So with some trepidation I took it to the owner and he opened it up .. I said that I could never give him an already-opened bottle and thanked him for going along with my plan..

Then back to my apartment I trotted with my half-full 250 ml dark green CIRIO brand bottle HIDING my LASER brand olive oil inside .. (I could hear the dark green CIRIO bottle say to me .. "Dad .. what is this stuff you put in me ? ") ..

Actually at $10.23 a full litre it is cost- wise comparable to COSTCO premium olive oil in a dark brown bottle that costs a tad more money ..

But why-oh-why not call it ..  LASERIO  .. ANYTHING but LASER .. say  .. "Made from the finest olives we could find throughout the entire European Union .."  .. spend a few pennies for a DARK GREEN / BROWN bottle ..

Now here is why I moved the writing over to this web site .. below is a photo of the two bottles and their brand names .. so you can SEE for yourself.. poor LASER even has a torn label.. but his olive oil is just fine ..  NOTICE his clear bottle and CIRIO's dark green bottle .. 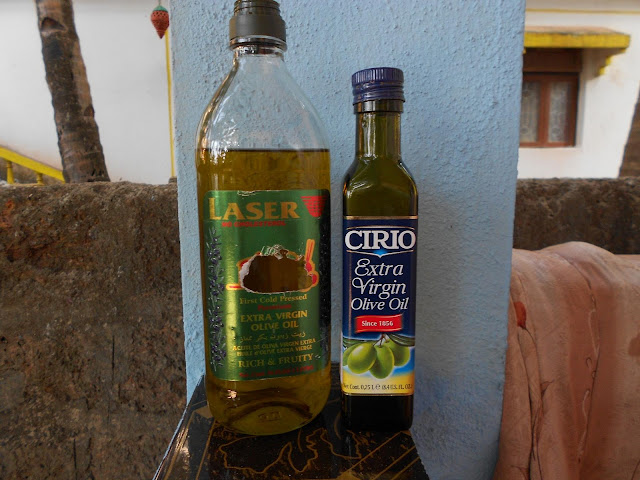 oh yeah i am having fun here in arambol beach in goa on the west coast of india 360 miles south of bombay .. much joy for a happy and joyous and sober new year 2012 .. cap .. can you recognize the photo was taken on my porch beside my couch .. on the porch railing against the blue column .. 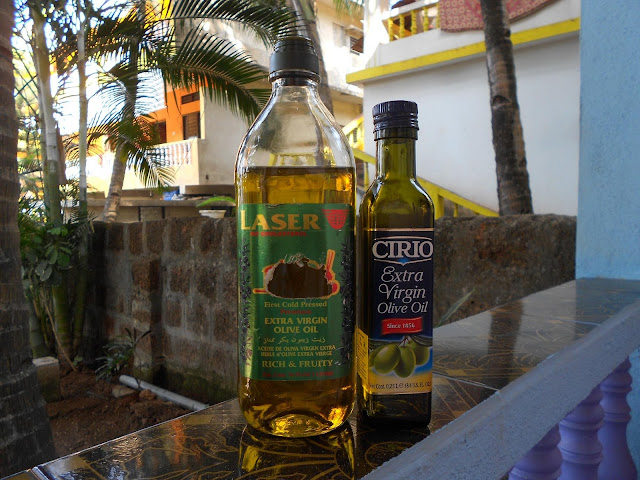 Jeanne 99631 .. I came back half a day later to see IF I could add another photo to an older post .. and I have .. still 'learning' this .. I MUST GOOGLE LASER OLIVE OIL .. I DID .. got 4,800,000 Google 'hits' .. laser is a technique the Italians have developed to combat fraudulent claims of some companies claiming the quality of 'extra virgin'  on lower quality olive oil .. go figure .. isn't GOOGLE SOMETHING .. actually little CIRIO looks kindda like he likes standing beside LASER .. he is sortta snuggled up beside her ..