Our local professional Ice Hockey Team .. the Alaska Aces .. are members of the Western Conference of the East Coast Hockey League (ECHL).  The ECHL is divided into two separate conferences .. the Eastern Conference and the Western Conference.  The goal for the teams in the ECHL is to win the Patrick J. Kelly Cup .. the trophy signifying the best team in the ECHL.  To win the Kelly Cup .. a team must first qualify for the Kelly Cup Playoffs.  The teams who qualify for the Kelly Cup playoffs must then win four individual elimination series consisting of winning four games in each seven-game-series .. called a best-of-seven format.

Our Alaska Aces qualified for the Kelly Cup Playoffs by winning the Western Conference Championship of the ECHL.

Having won their first three playoff series .. our Alaska Aces then advanced to the KELLY CUP FINALS.  On Friday .. May 30th .. the Aces met the Cincinnati Ohio Cyclones here in Anchorage Alaska at our Sullivan Arena to begin a final best-of-seven series to determine THE CHAMPIONS .. the winners of the Patrick J. Kelly Cup and ECHL CHAMPIONS.

Patti and I attended each and every playoff game that was played here in Anchorage Alaska during this years 2014 Kelly Cup Playoffs. 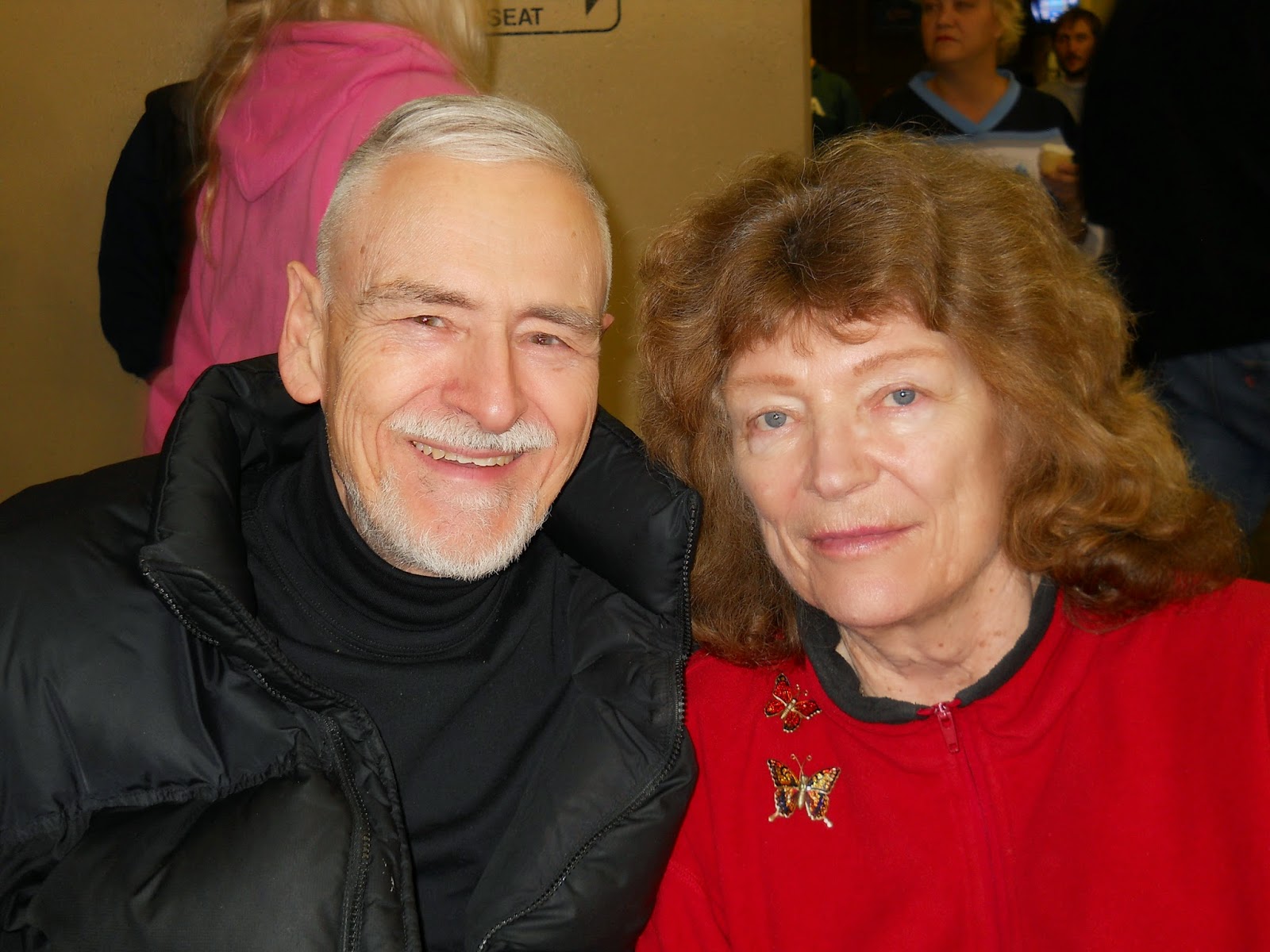 Below are a series of photographs taken during the three home games here in Anchorage Alaska between our Alaska Aces and the Cincinnati Ohio Cyclones.

Each and every game begins with the showing of our United States of America Flag and the singing of our National Anthem .. The Star Spangled Banner. 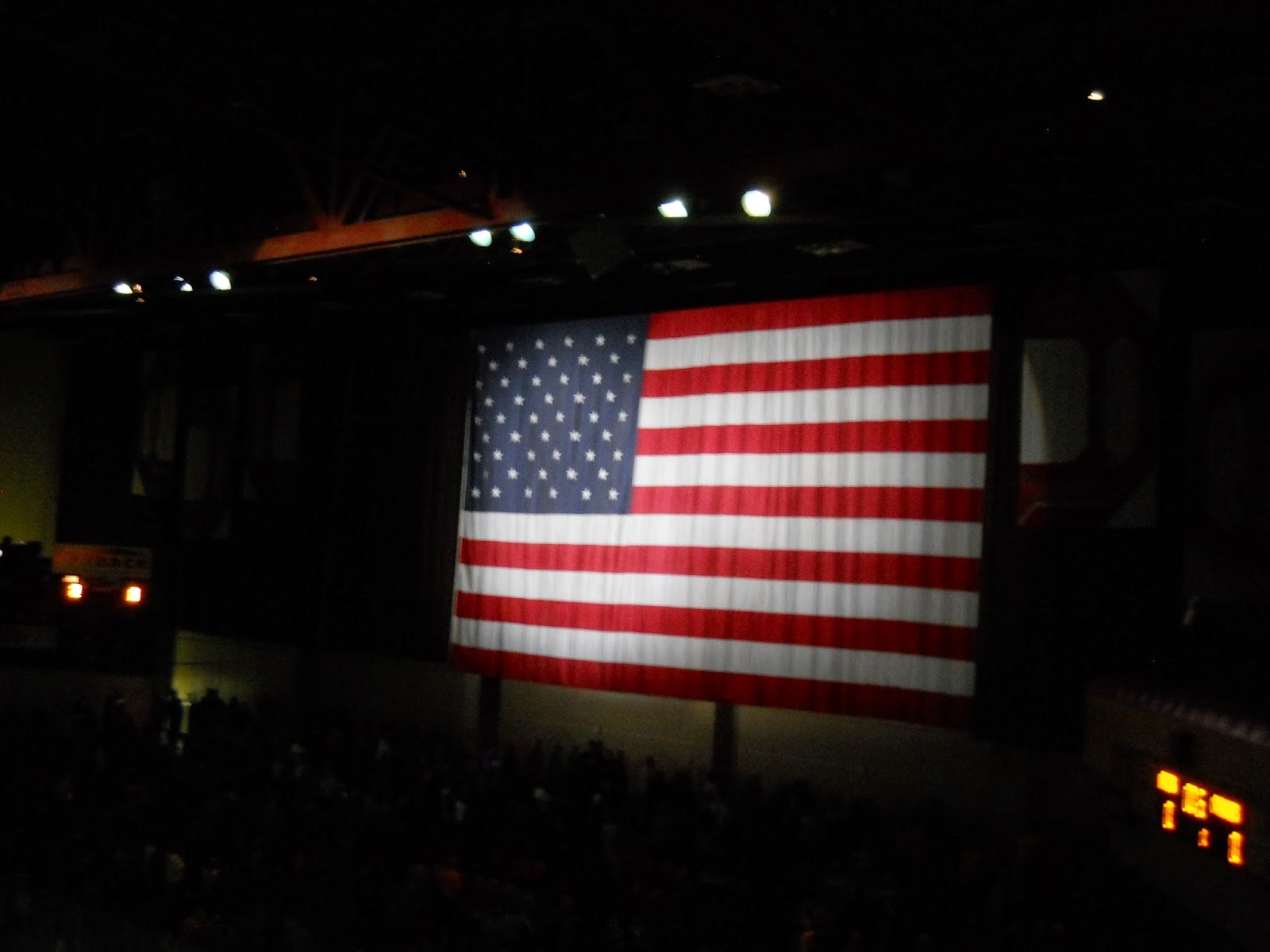 Now it is time for some Ice Hockey! 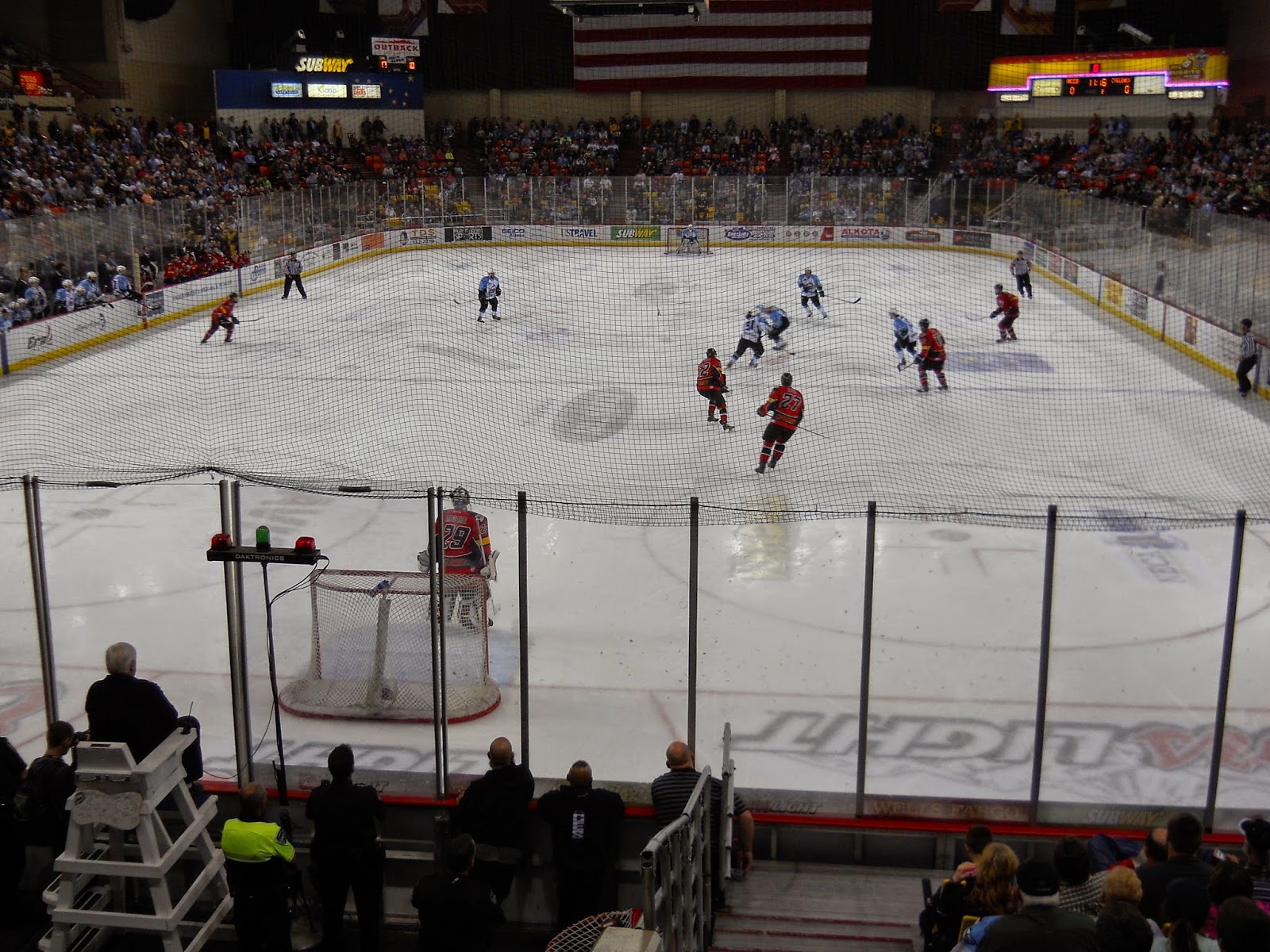 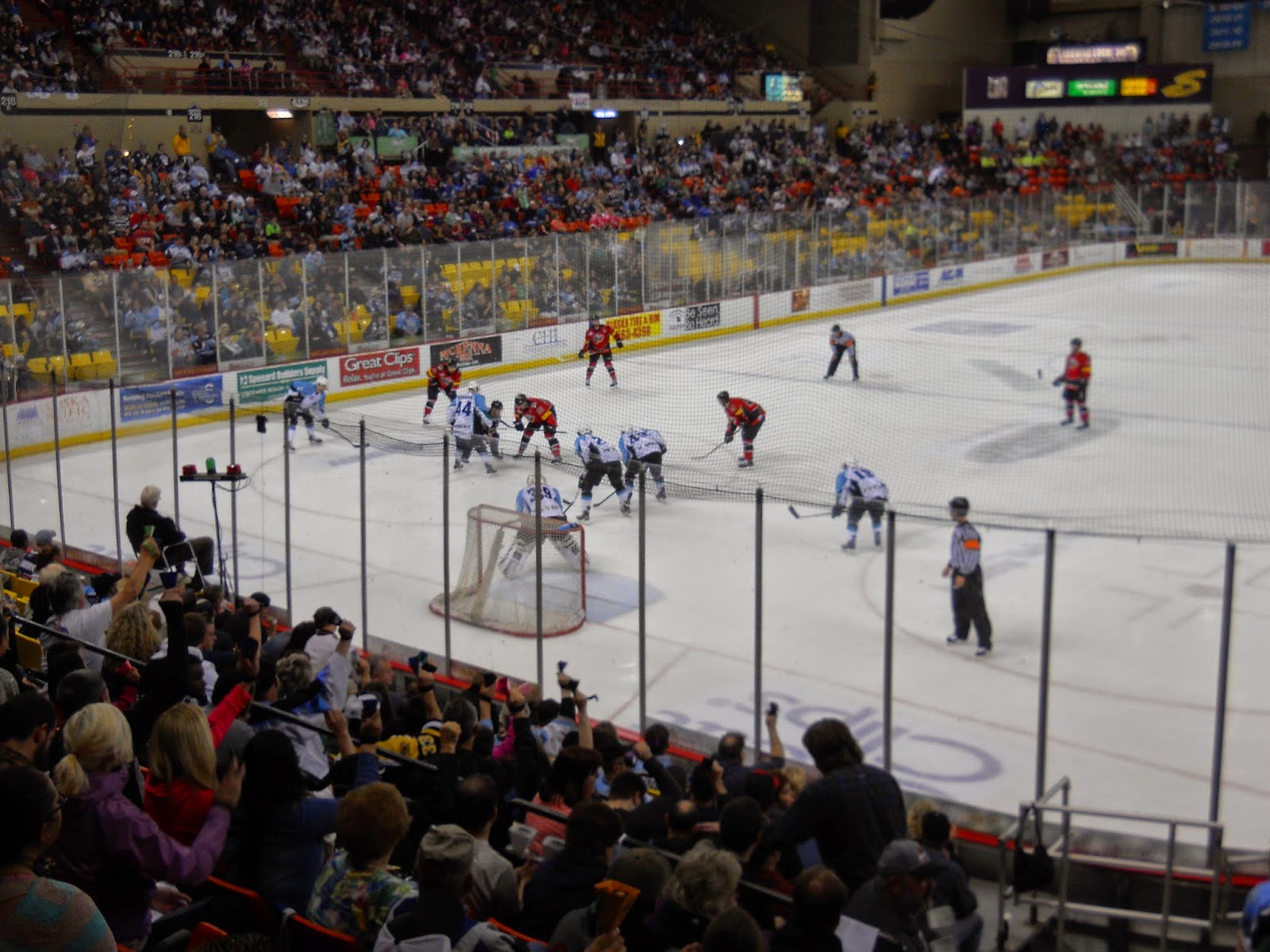 Our Alaska Aces won game 1 of the series with Cincinnati.  Shortly after I snapped the below photo the Aces scored an empty-net-goal to make the final score 5 - 3. 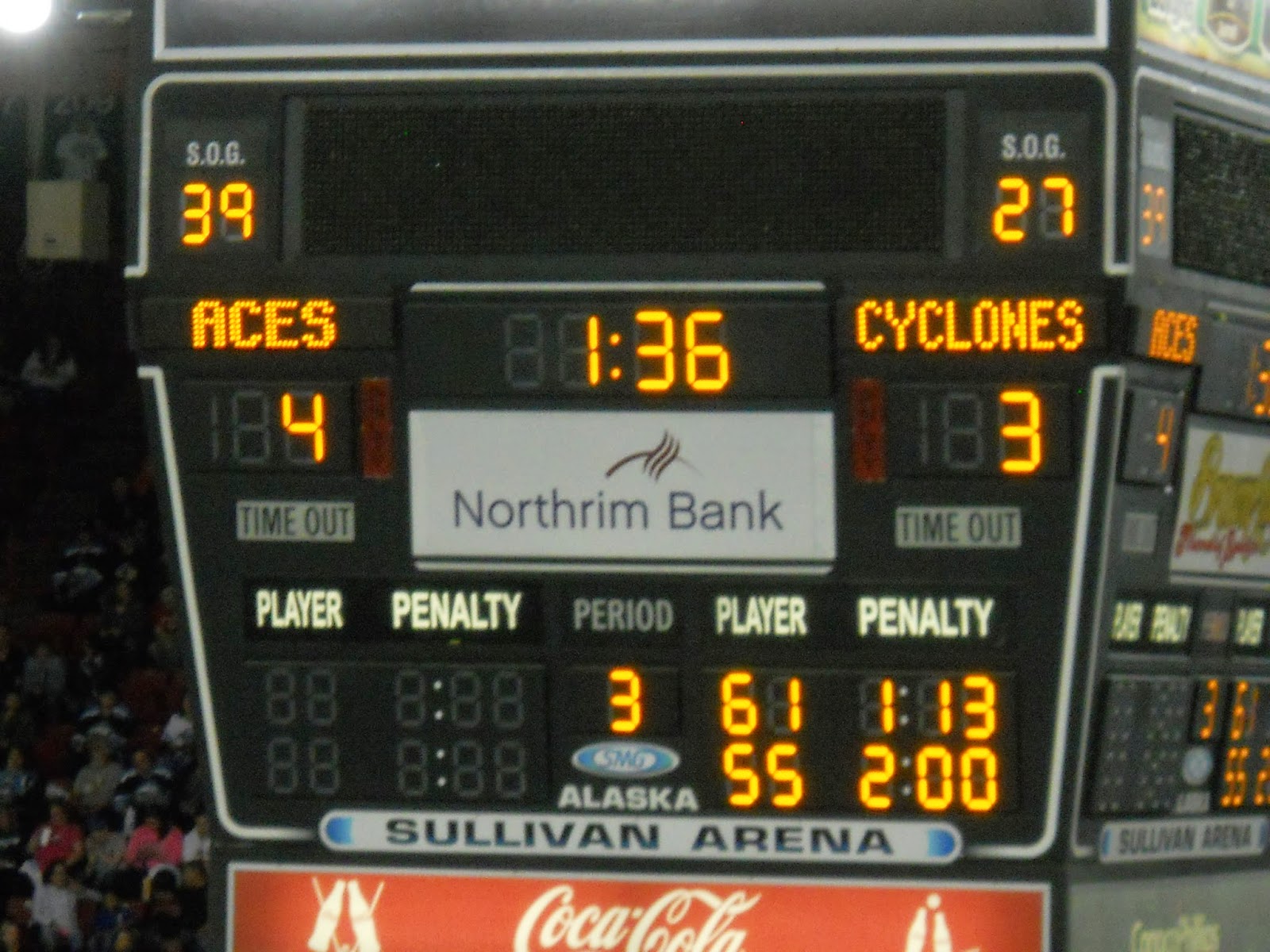 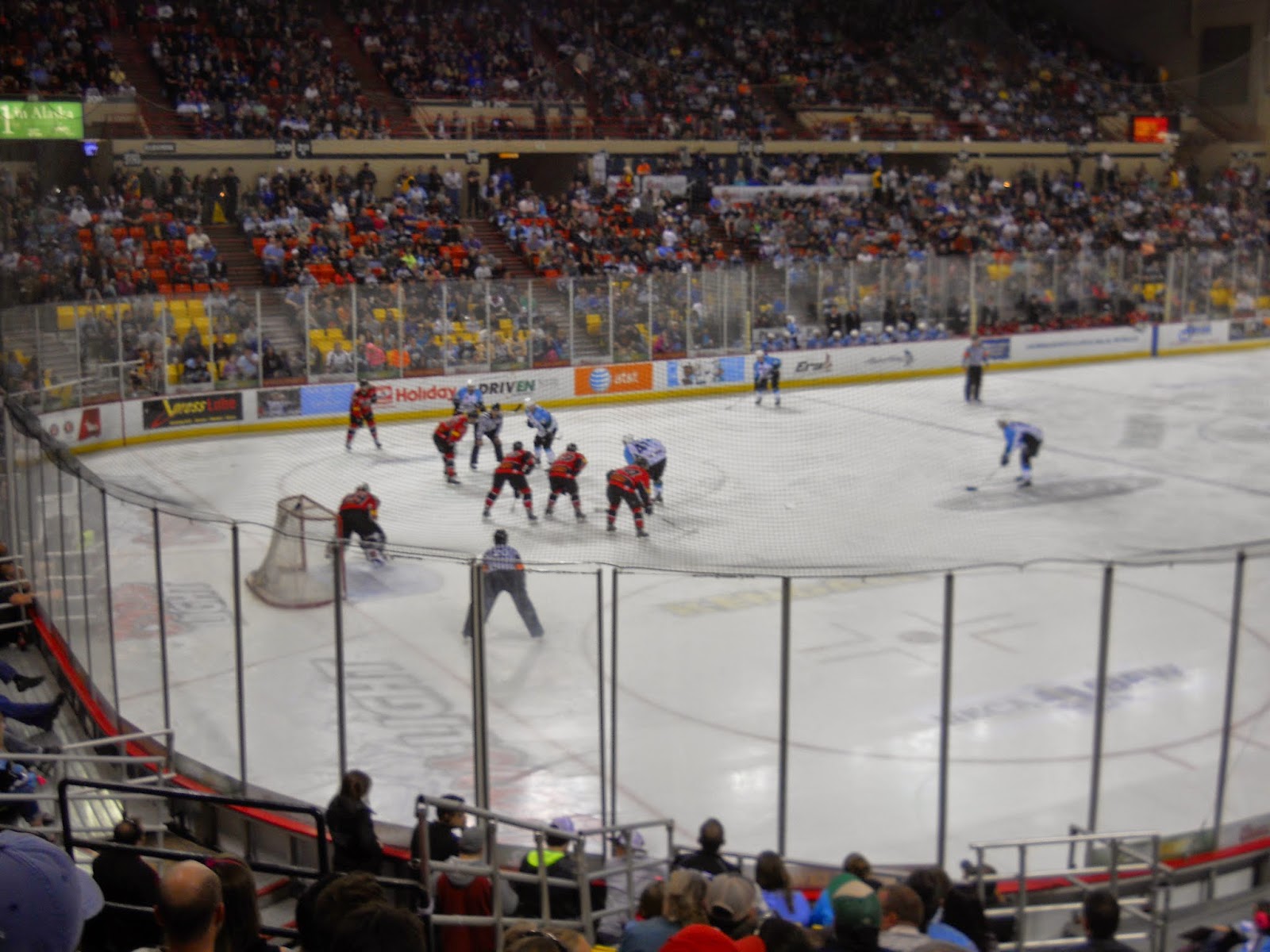 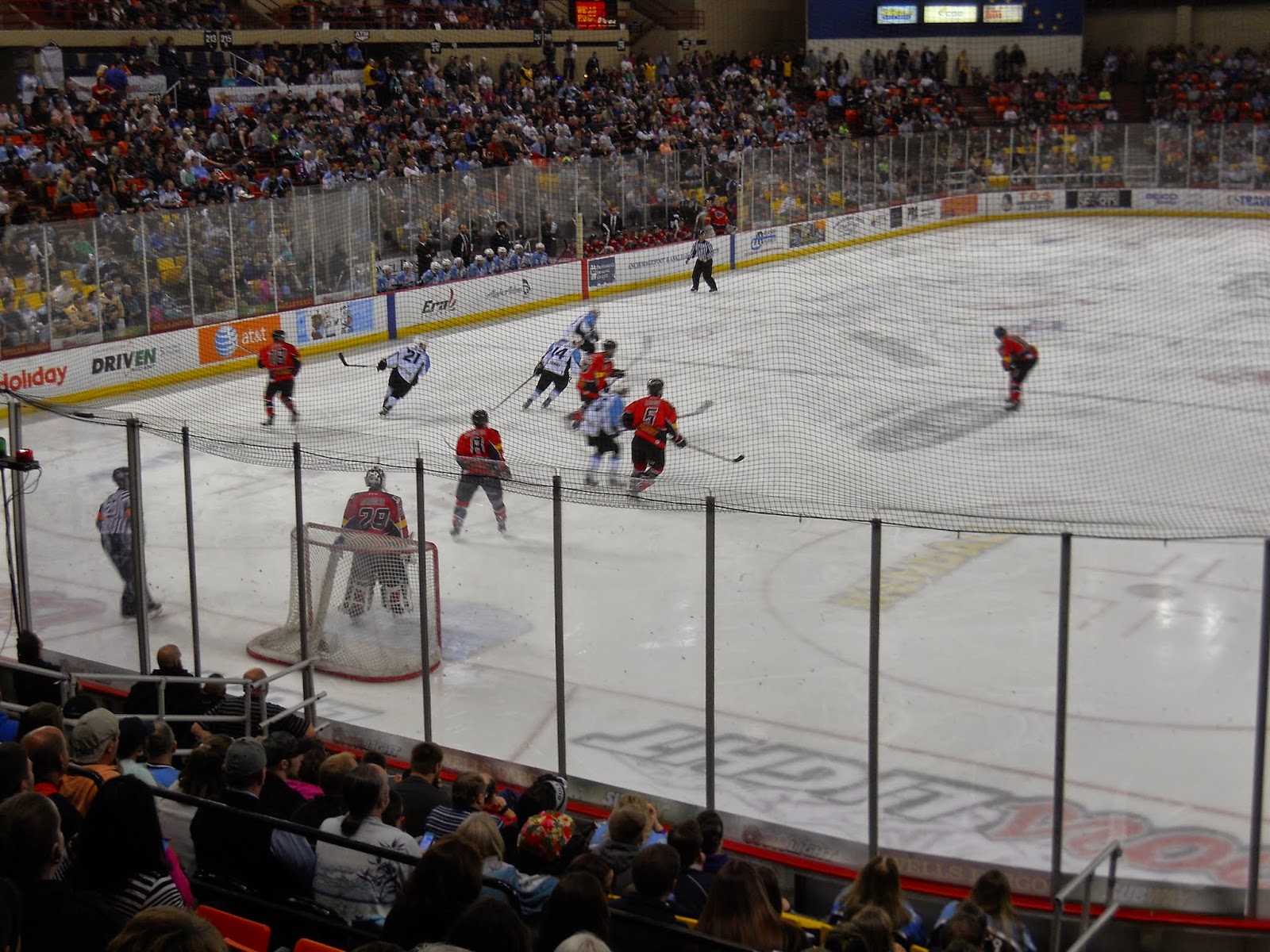 Our Alaska Aces lost game 2 of the series with the Cincinnati Cyclones by the score of 2 - 1.  So after two games the series was all tied-up at one game apiece.

Below are some game 3 photos.  Game 3 was the last game of the season played here in Anchorage Alaska.

Below is a close-up photo of three Cincinnati players showing their uniforms.  The player on the right is the goal-keeper also called a goalie.  Notice the large pads on his legs. 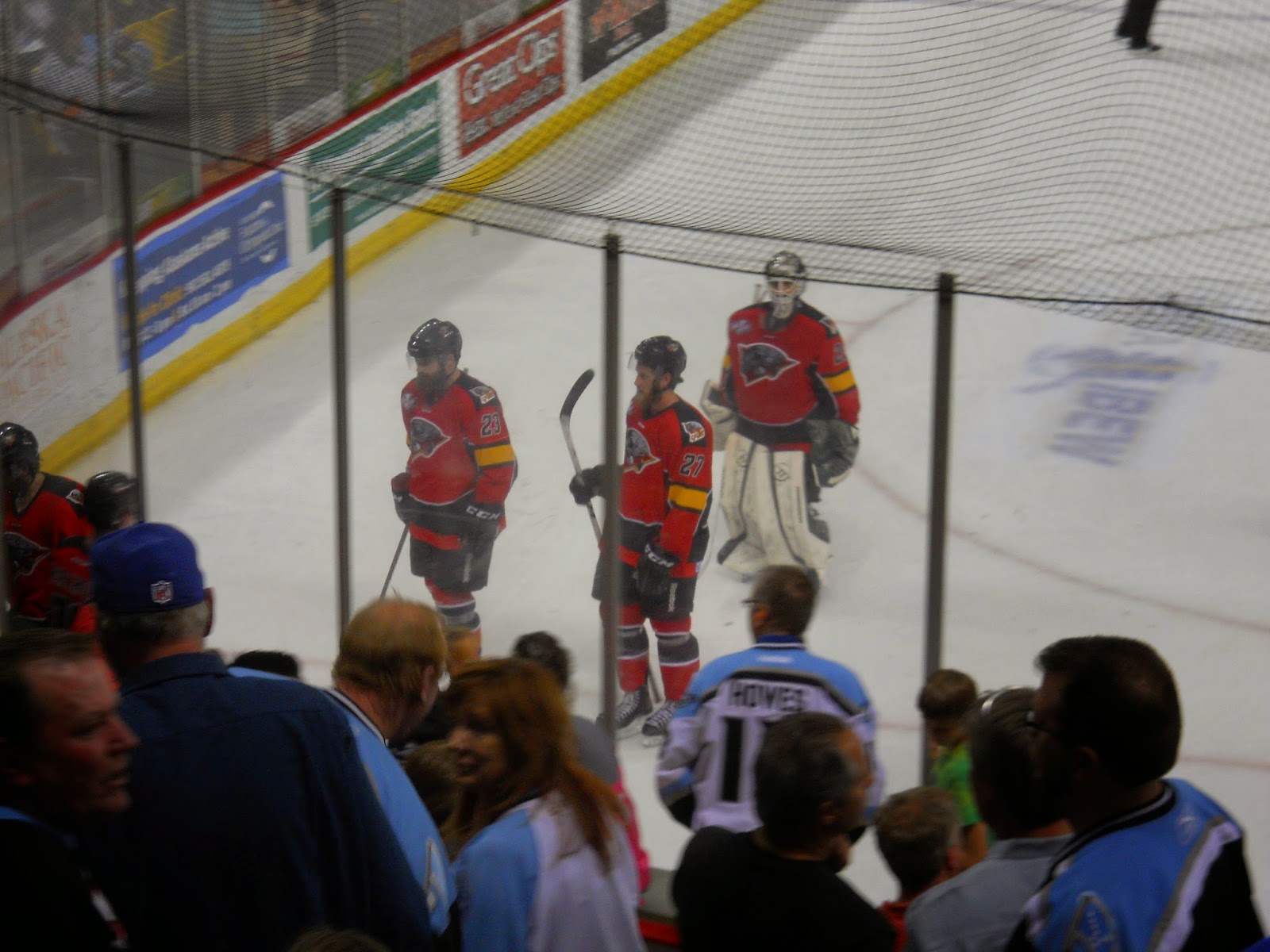 In the immediate foreground of the below photo .. player number 39 is our Alaska Aces 'goalie' guarding-his-net! 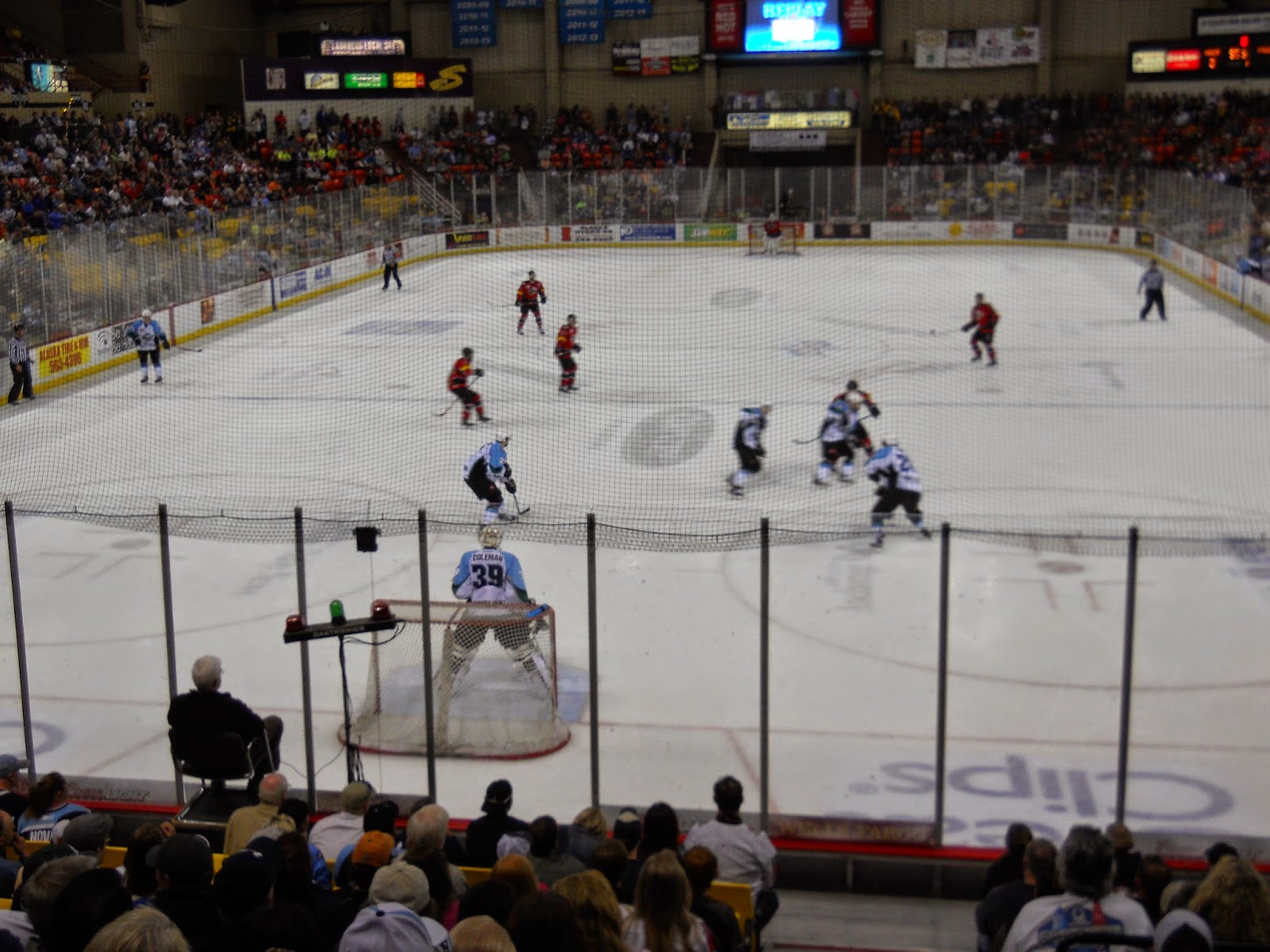 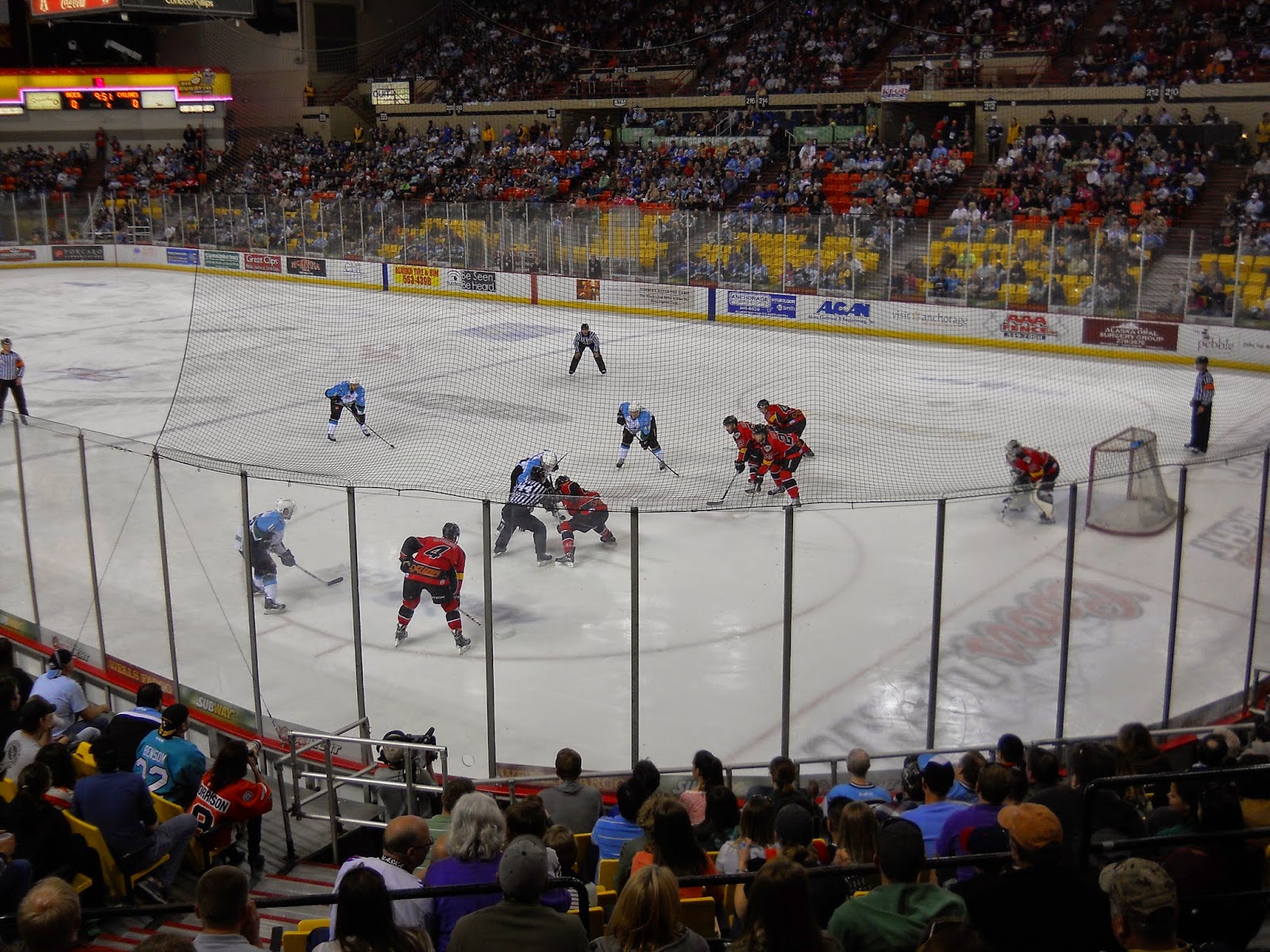 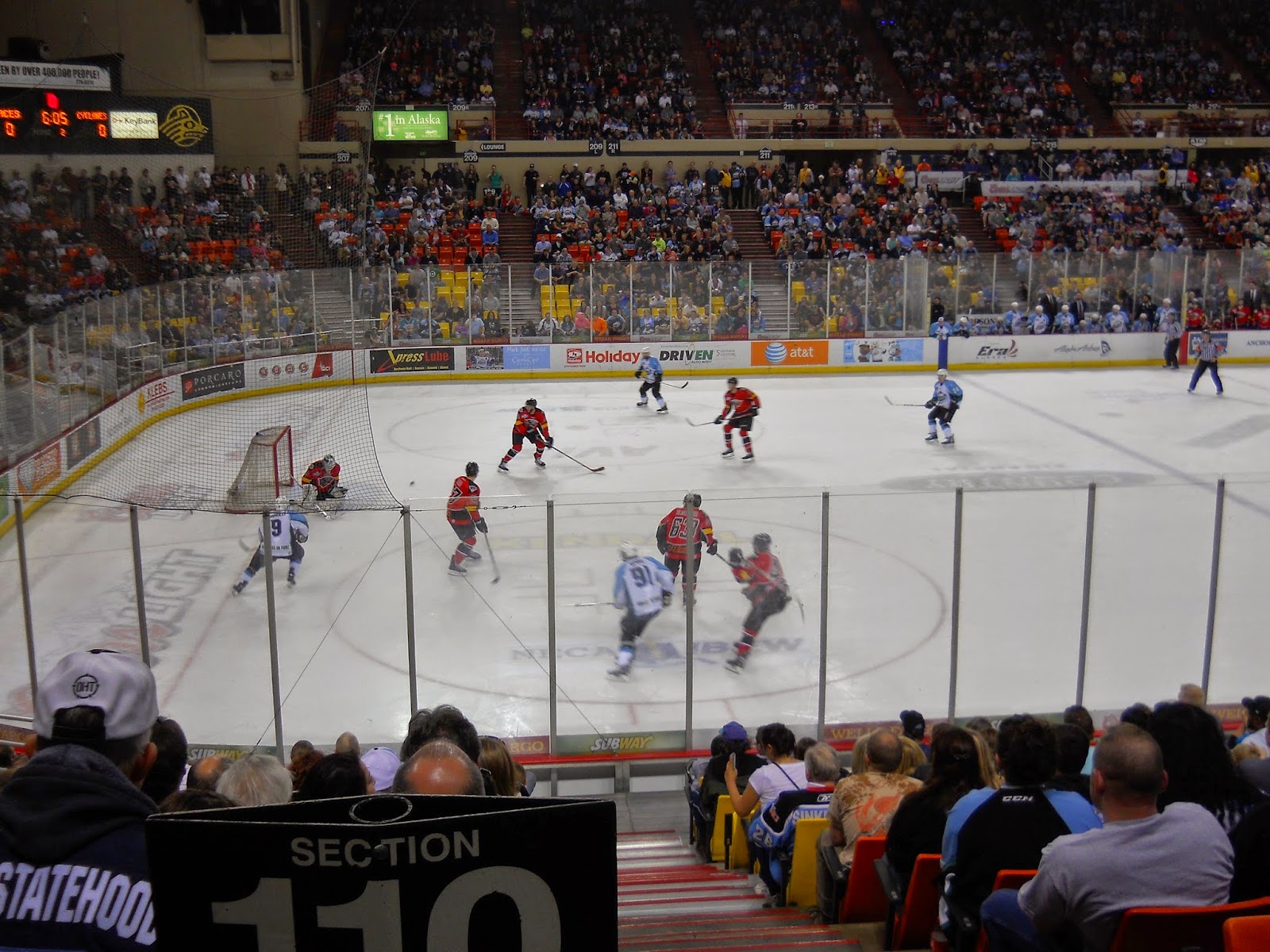 And our Alaska Aces WON game three of the series! 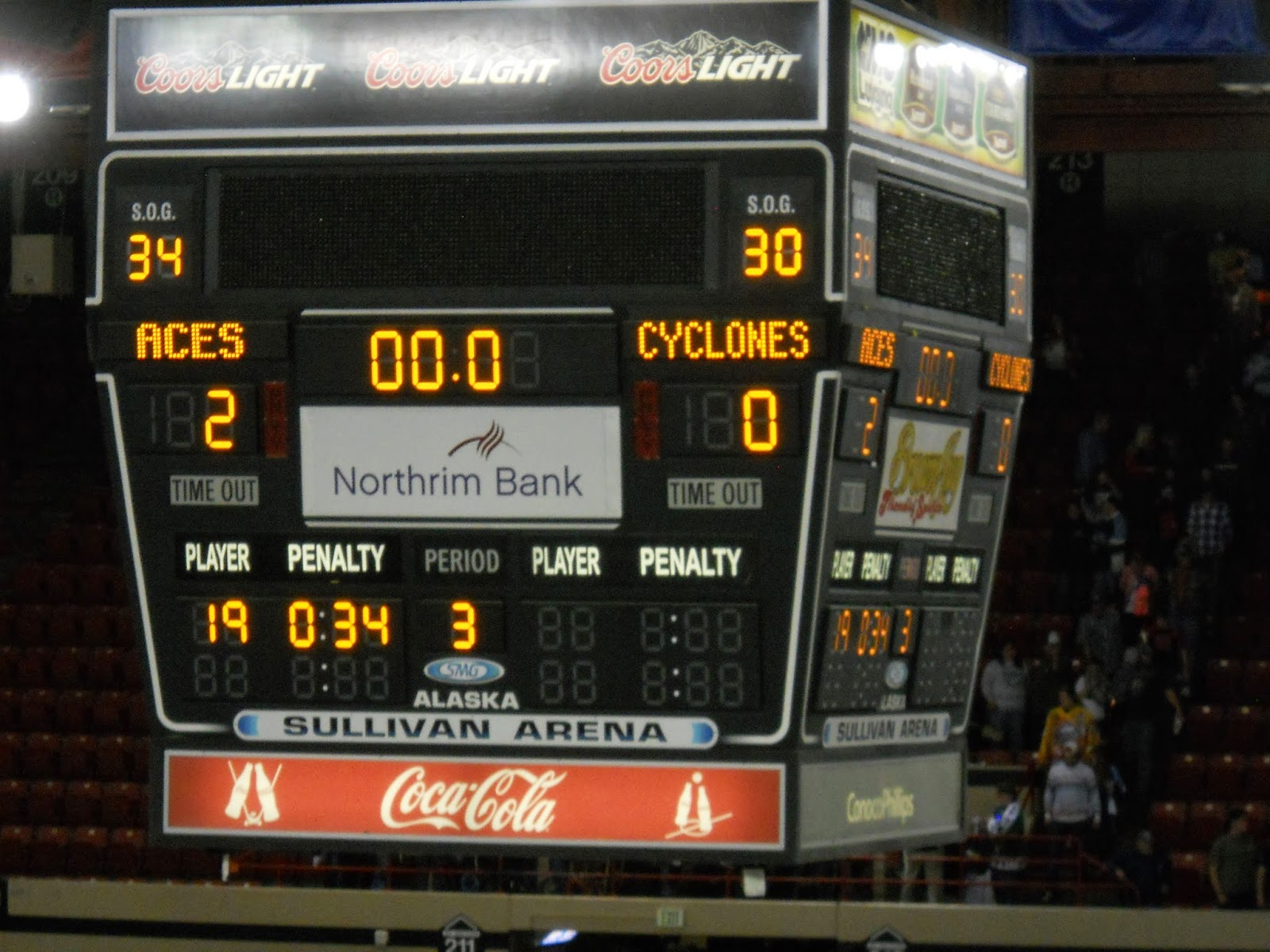 WE ARE THE CHAMPIONS OF THE ECHL!

OUR ALASKA ACES ARE THE PATRICK J. KELLY CUP AND ECHL CHAMPIONS !! 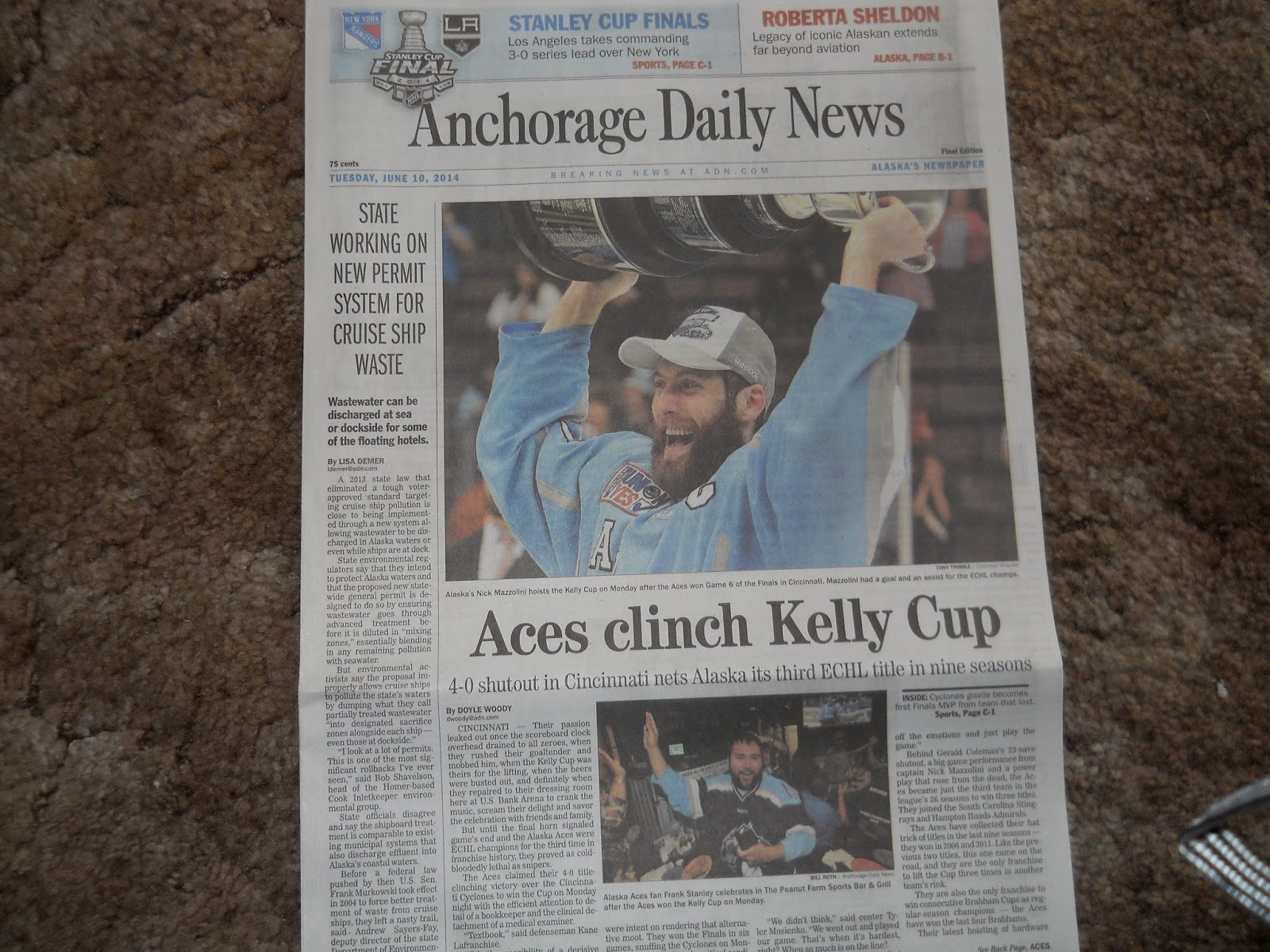 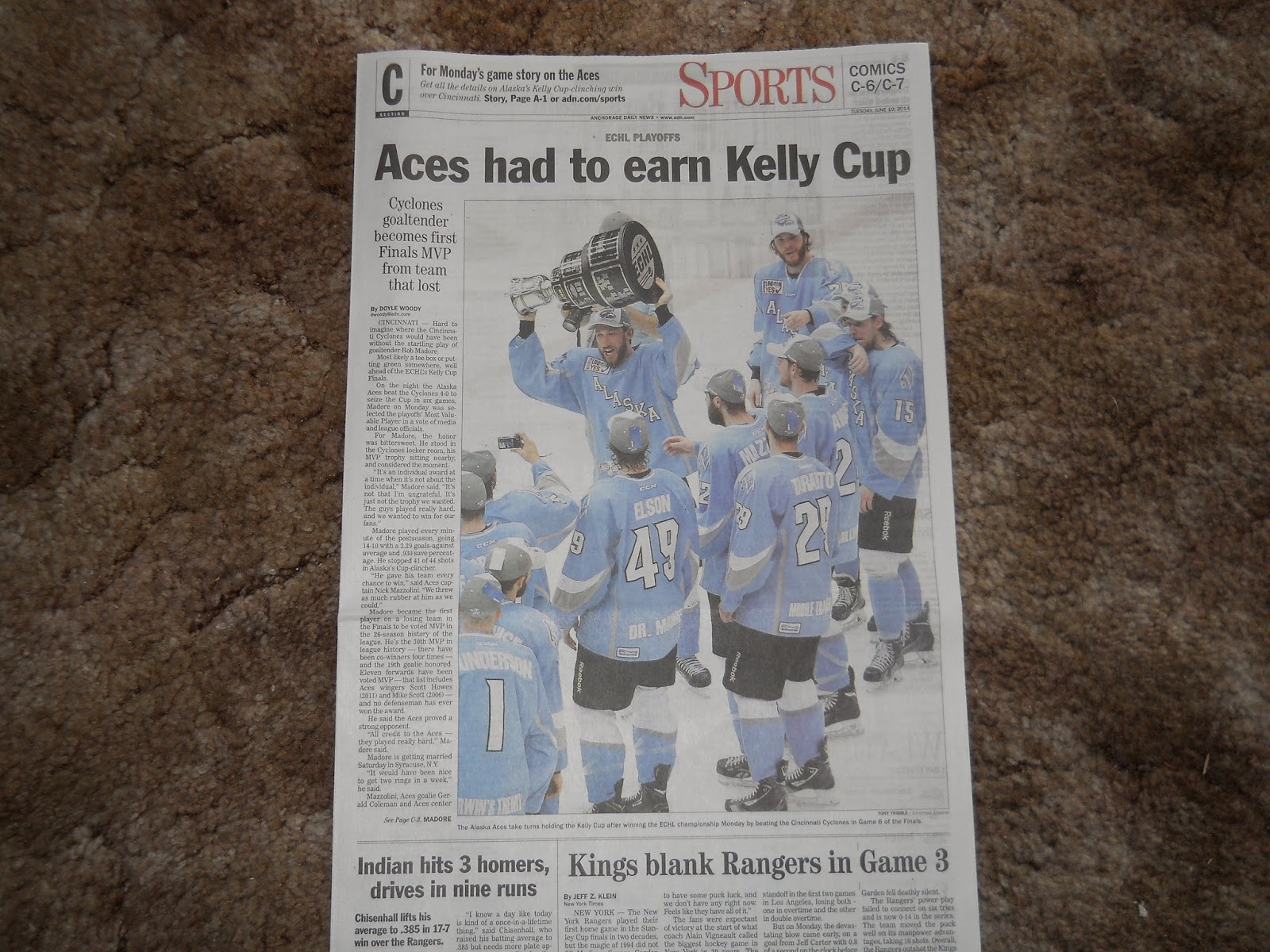 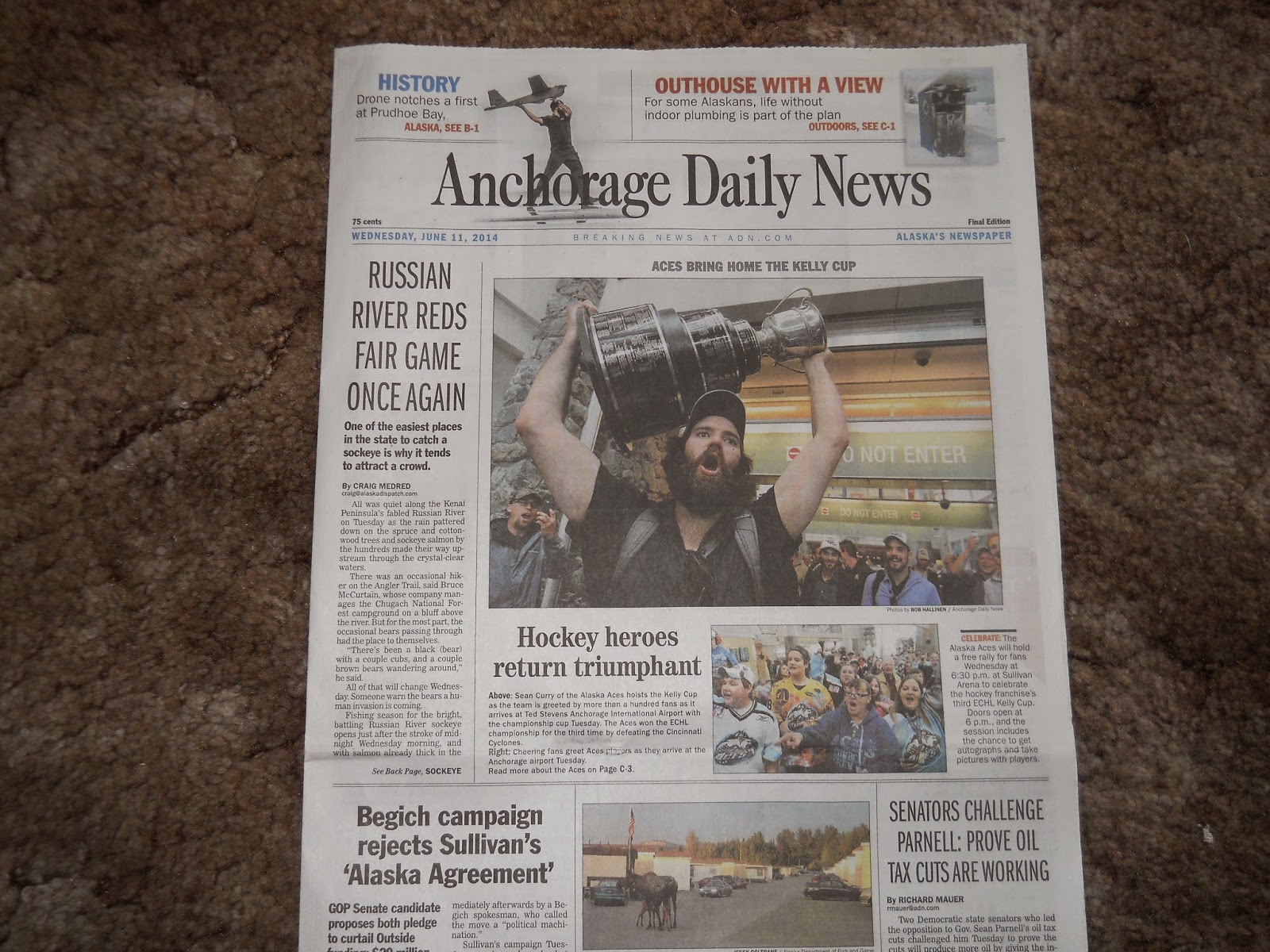 When the Alaska Aces returned to Anchorage Alaska after winning the Kelly Cup and the ECHL Championship in Cincinnati Ohio we all enjoyed a GREAT CELEBRATION here at our Sullivan Arena!

Talk-about-a-line to enter the Sullivan Arena! 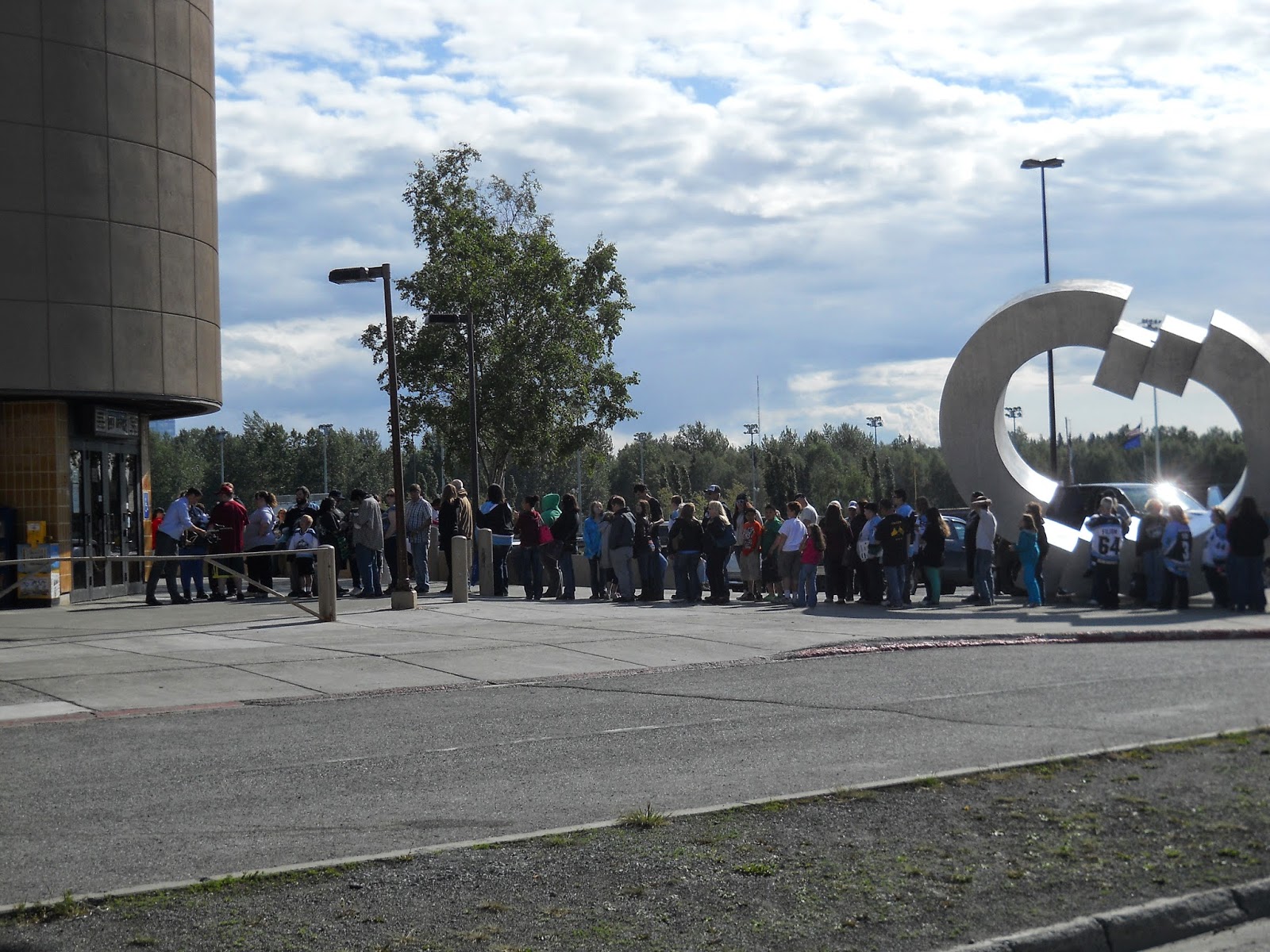 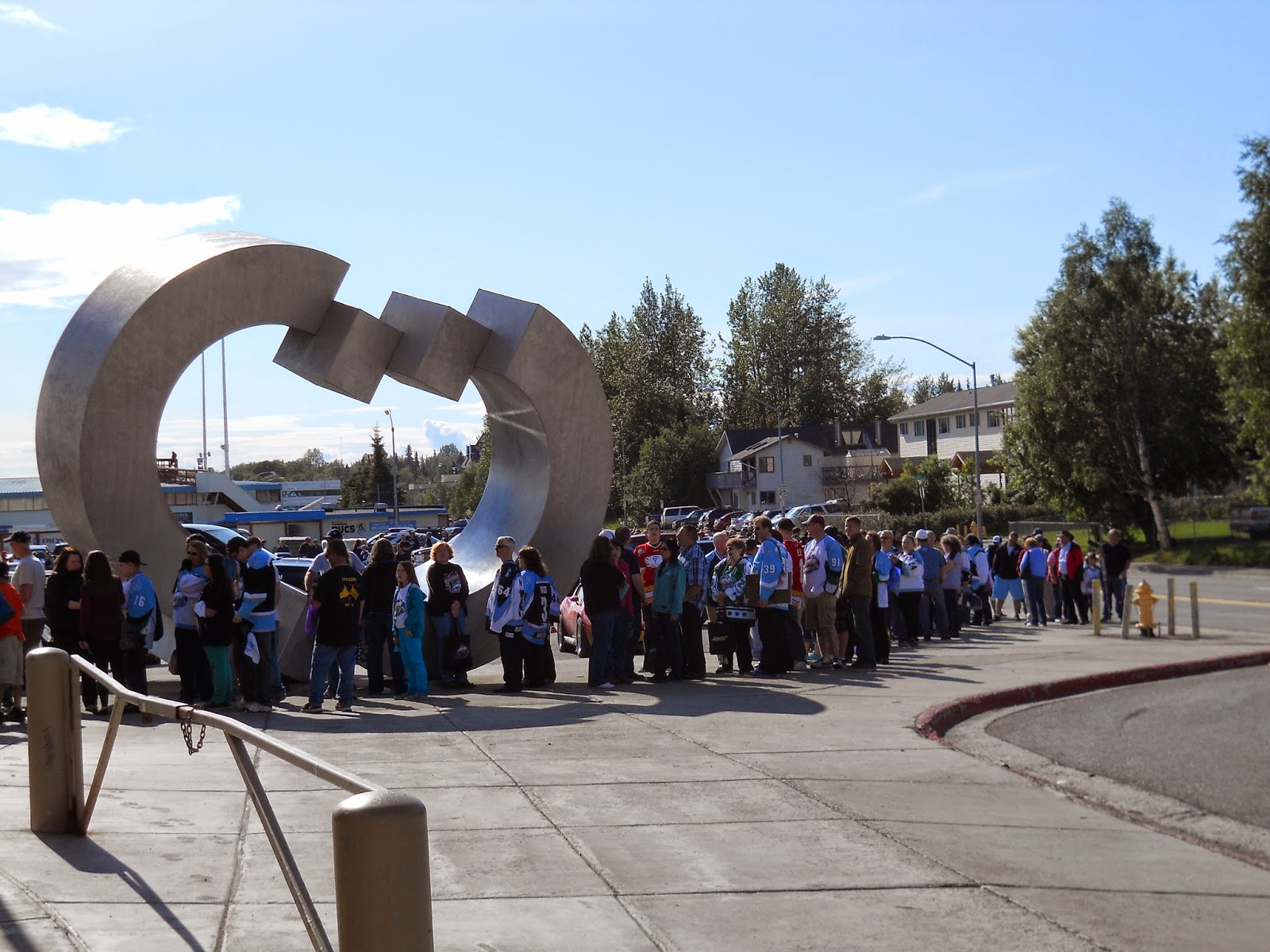 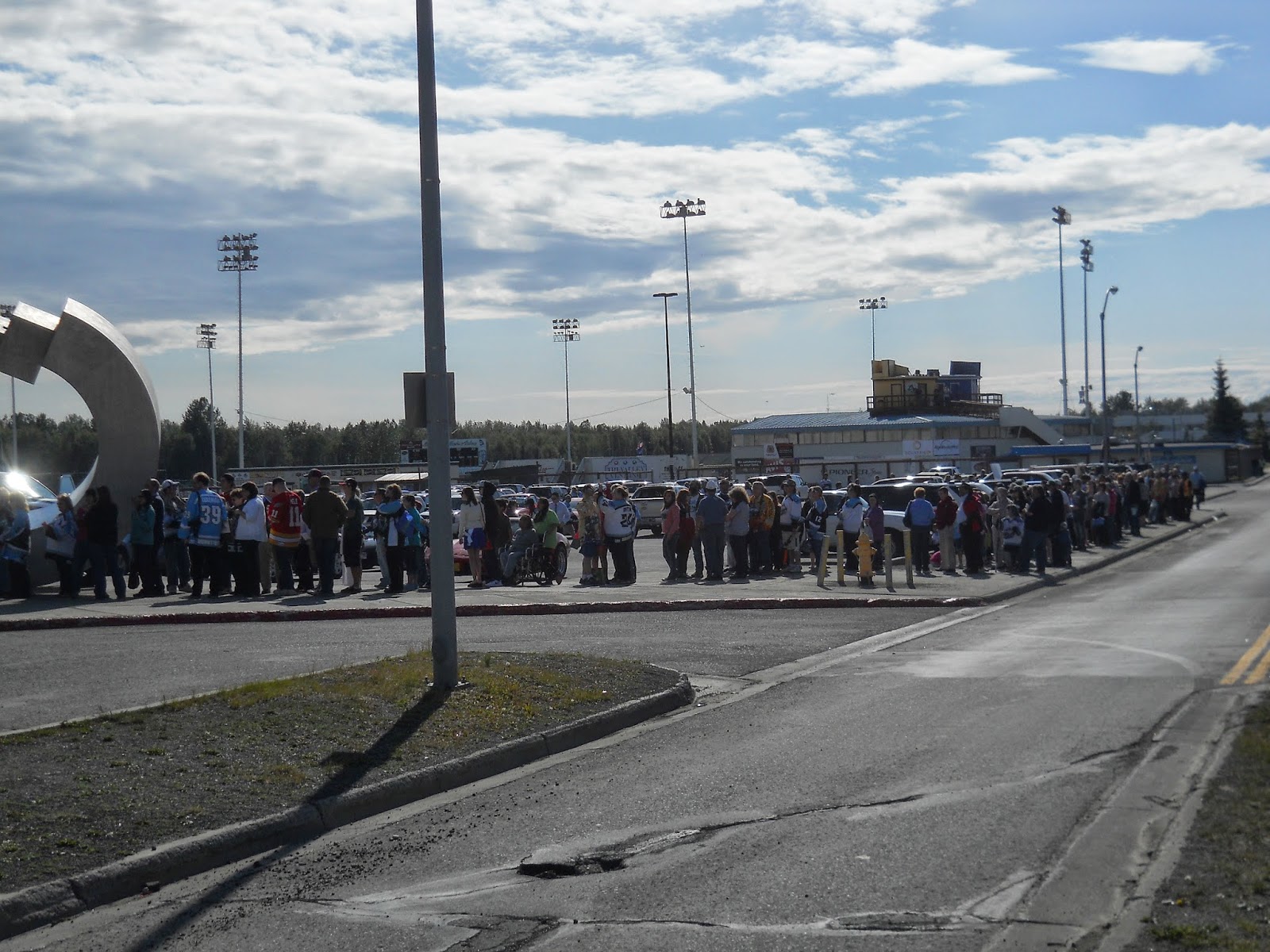 Oh yes .. it was not long ago that it was WINTER here at the Sullivan Arena! 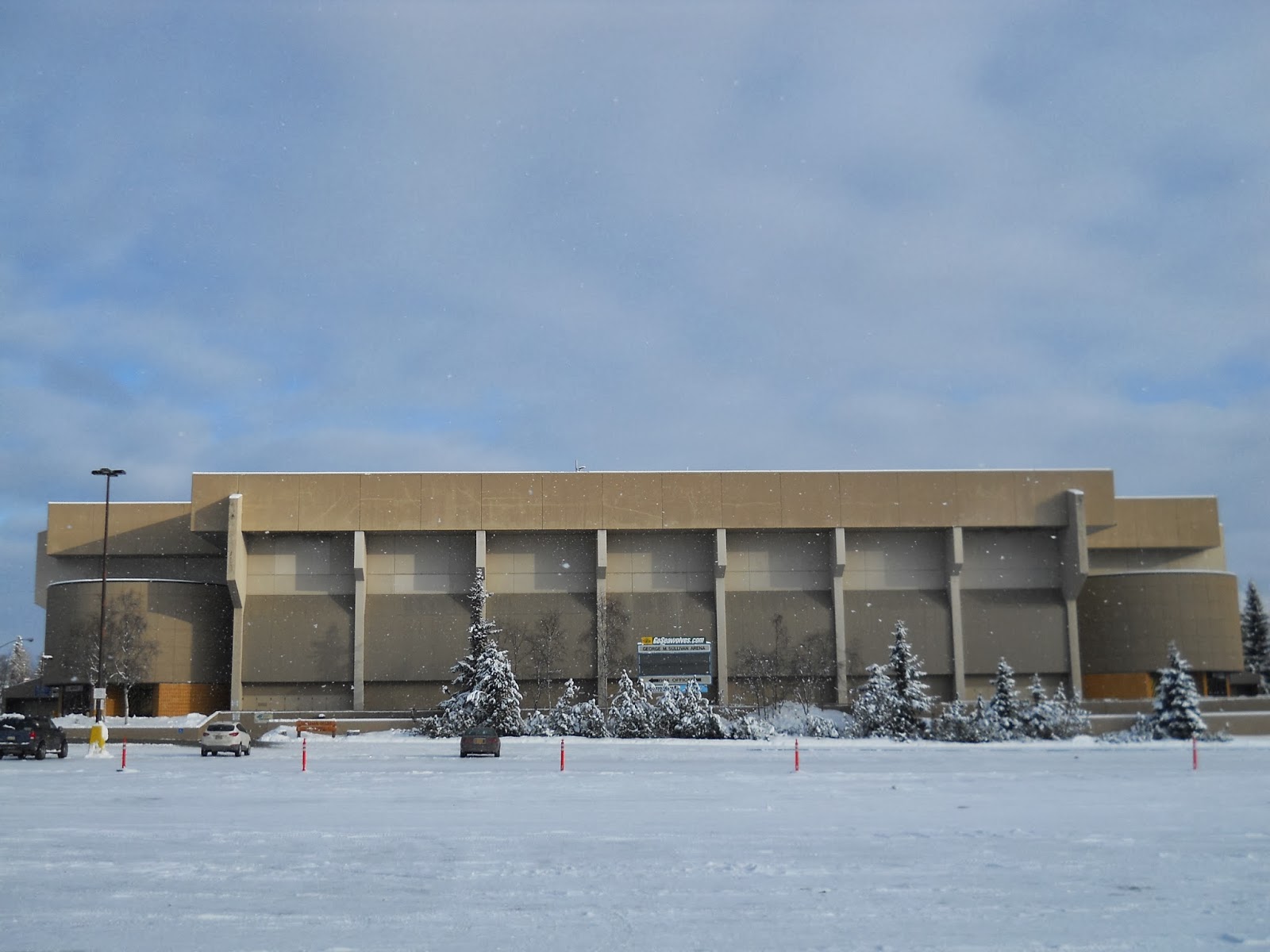 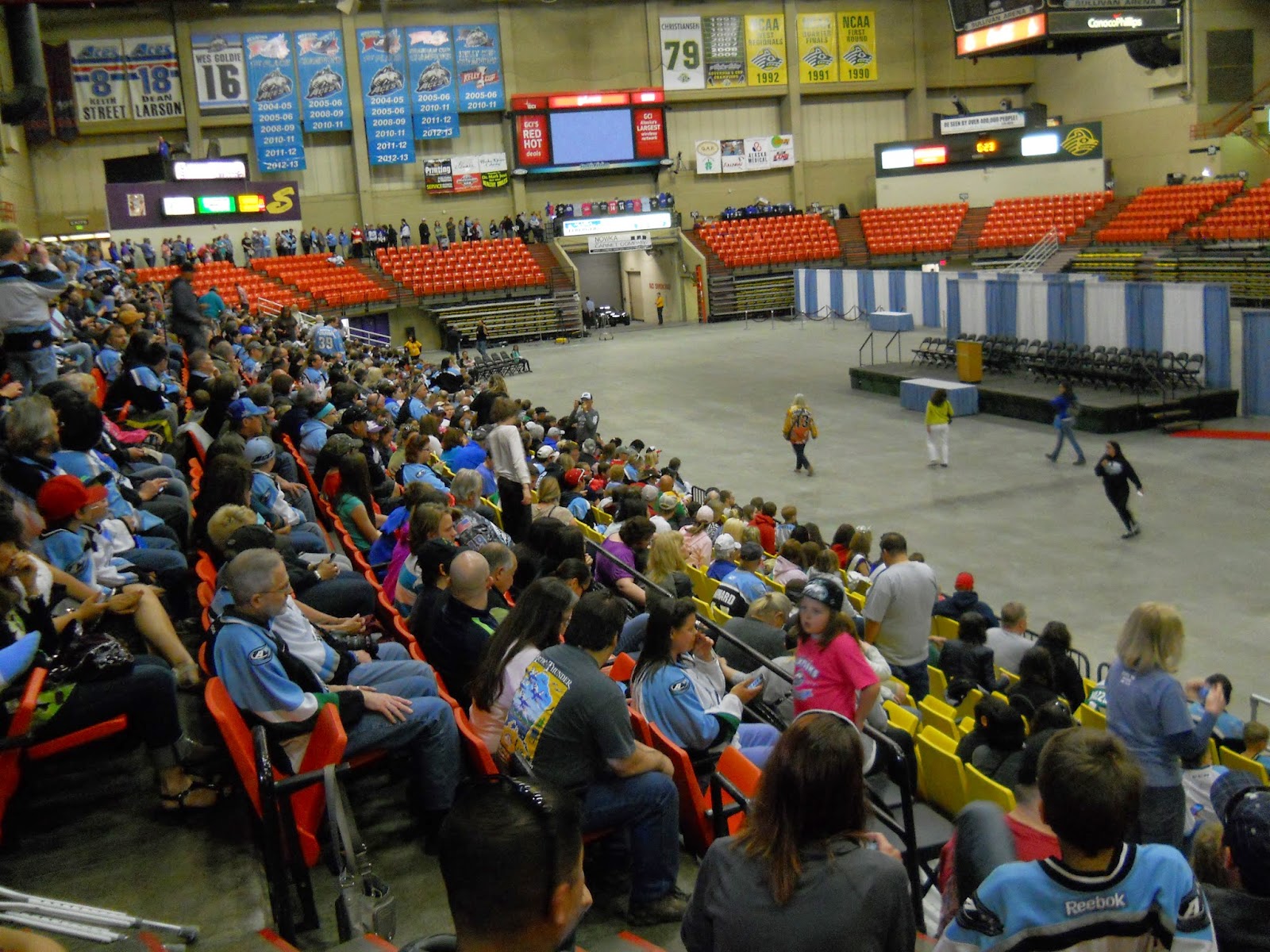 Can you all relate the above and the below photographs to each other?  It is difficult to do isn't it! 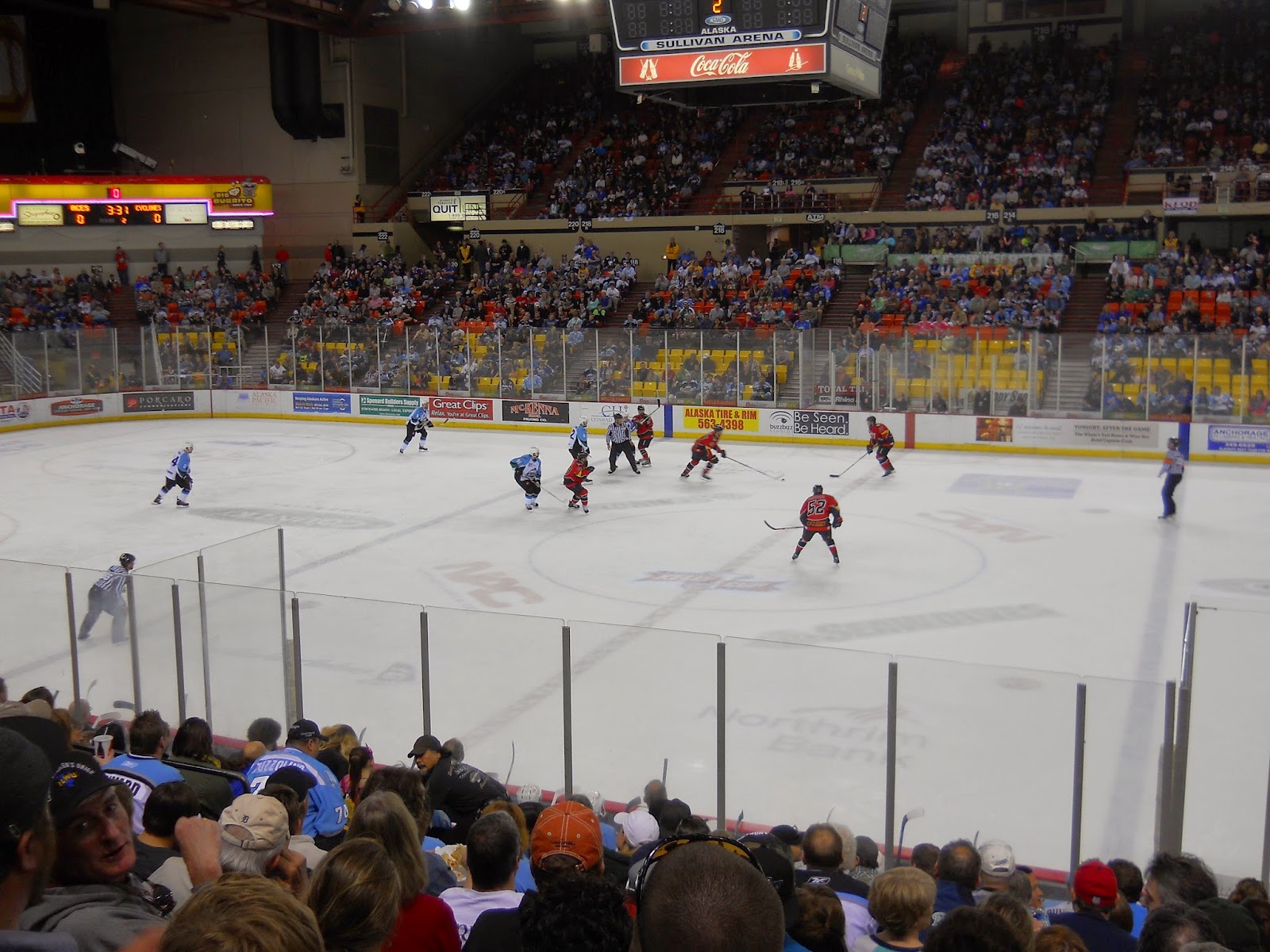 Below is a photo of the two Zamboni's used to resurface the ice during the games .. sitting on a concrete floor! 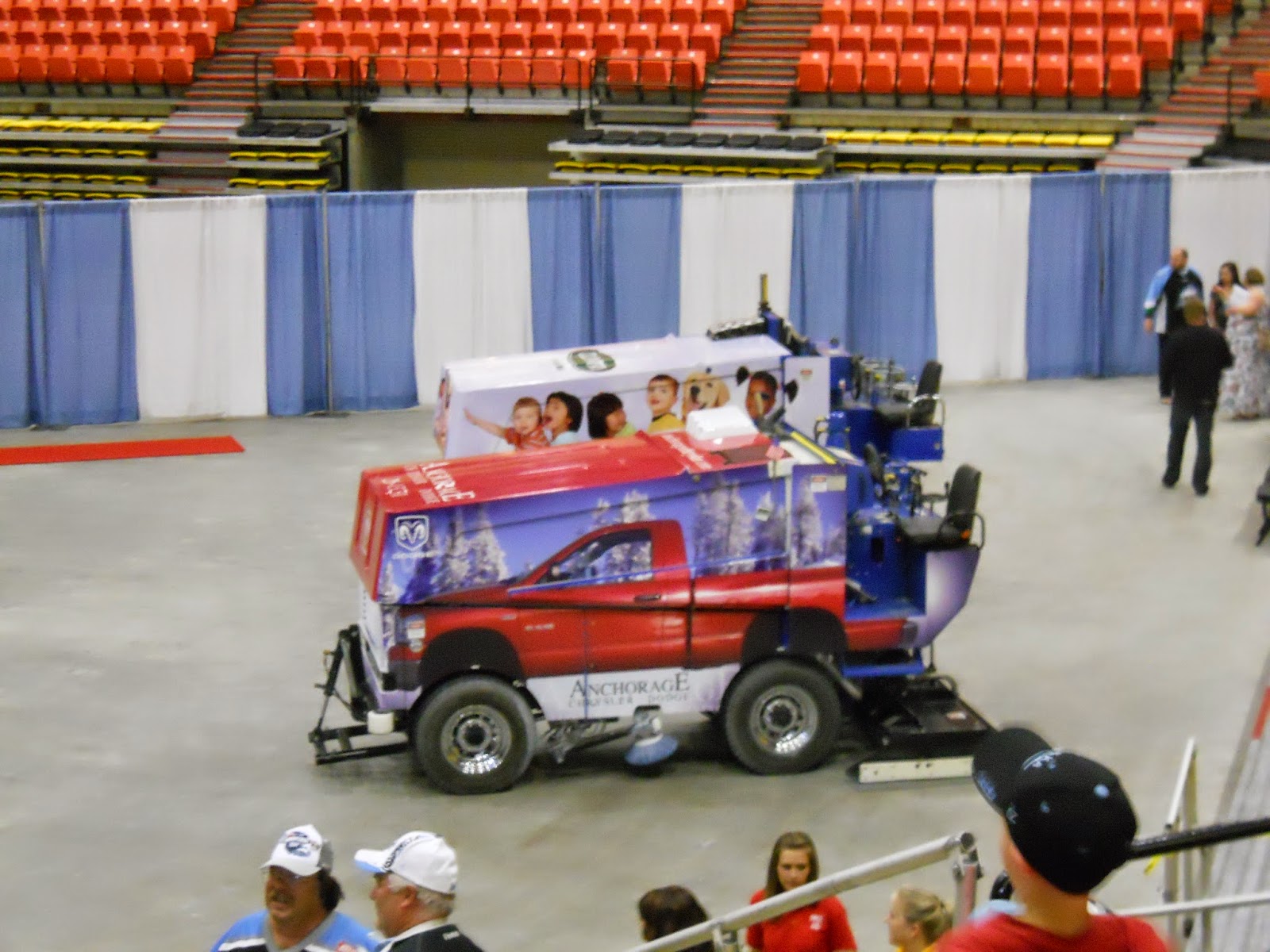 And below you see the above two Zamboni's at work re-surfacing the ice between periods at a game earlier!  What a difference! 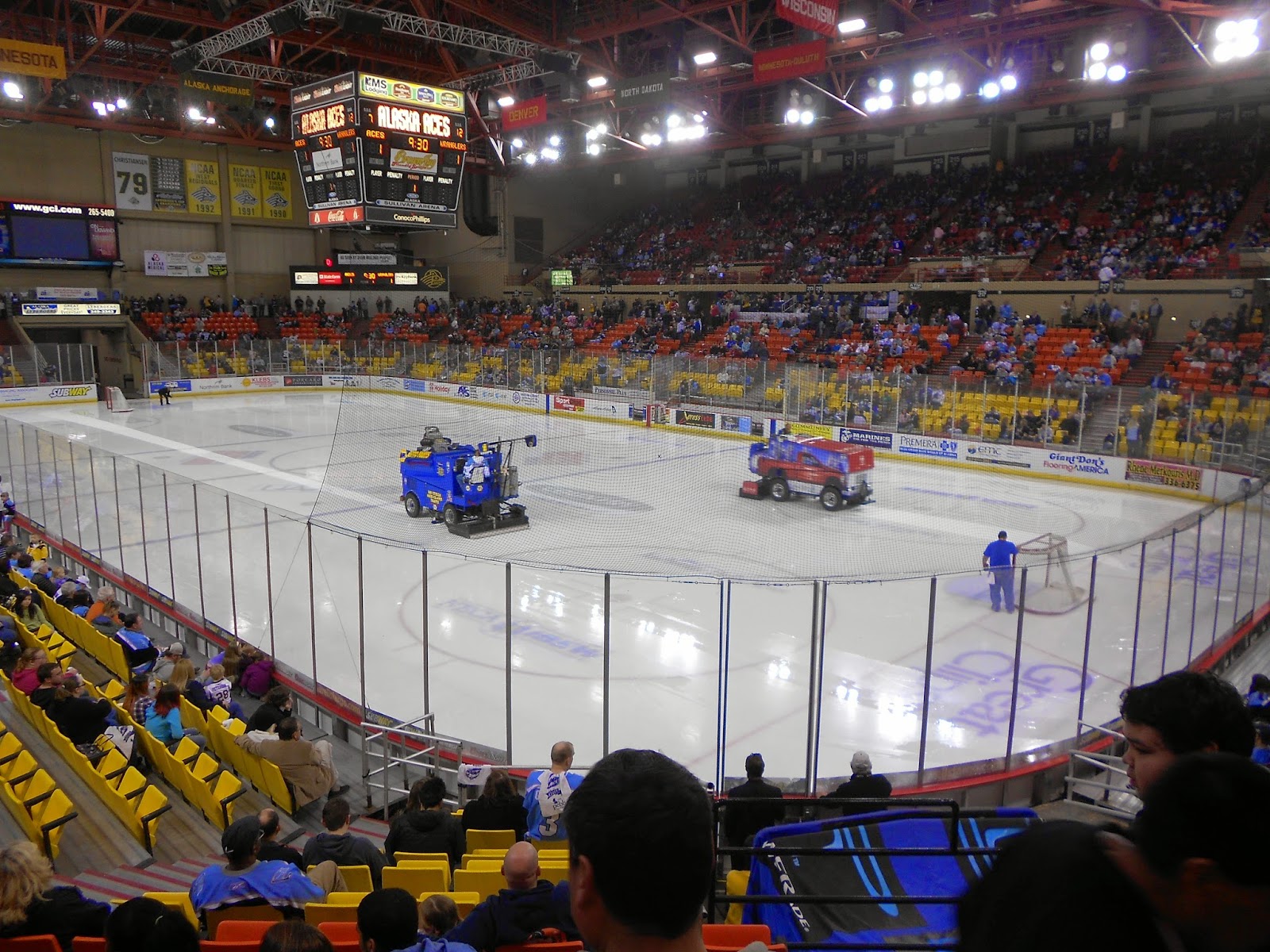 Sorry-to-note but the lighting was on the dim-side and so the below photographs are 'blurry' since I had to hand-hold my camera at a slow-shutter-speed.  But you get-the-idea.  All of the players were sitting together while speeches were made and the fans CHEERED LOUDLY for OUR ALASKA ACES THE CHAMPIONS OF THE ECHL AND WINNERS OF THE PATRICK J. KELLY CUP! 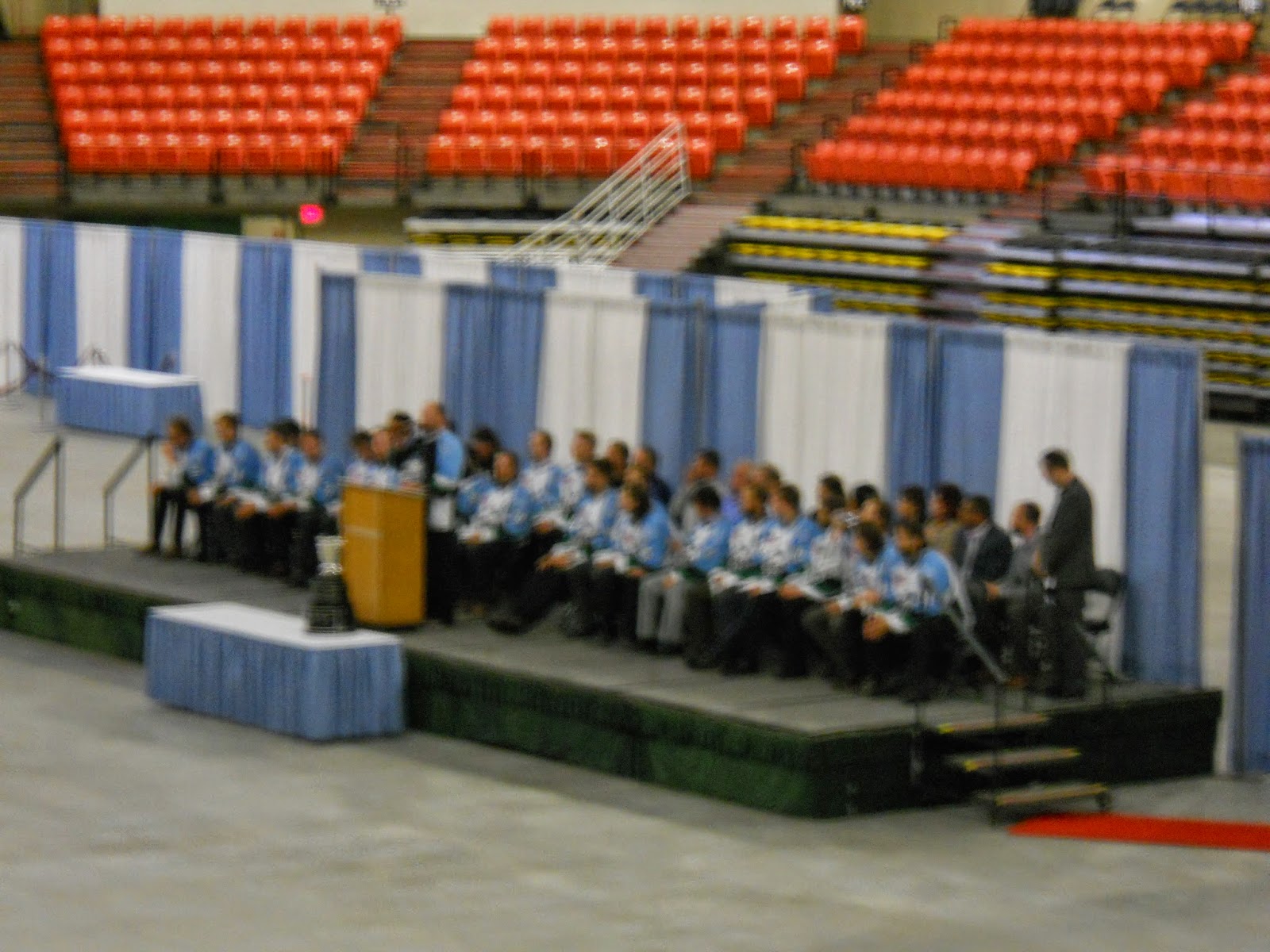 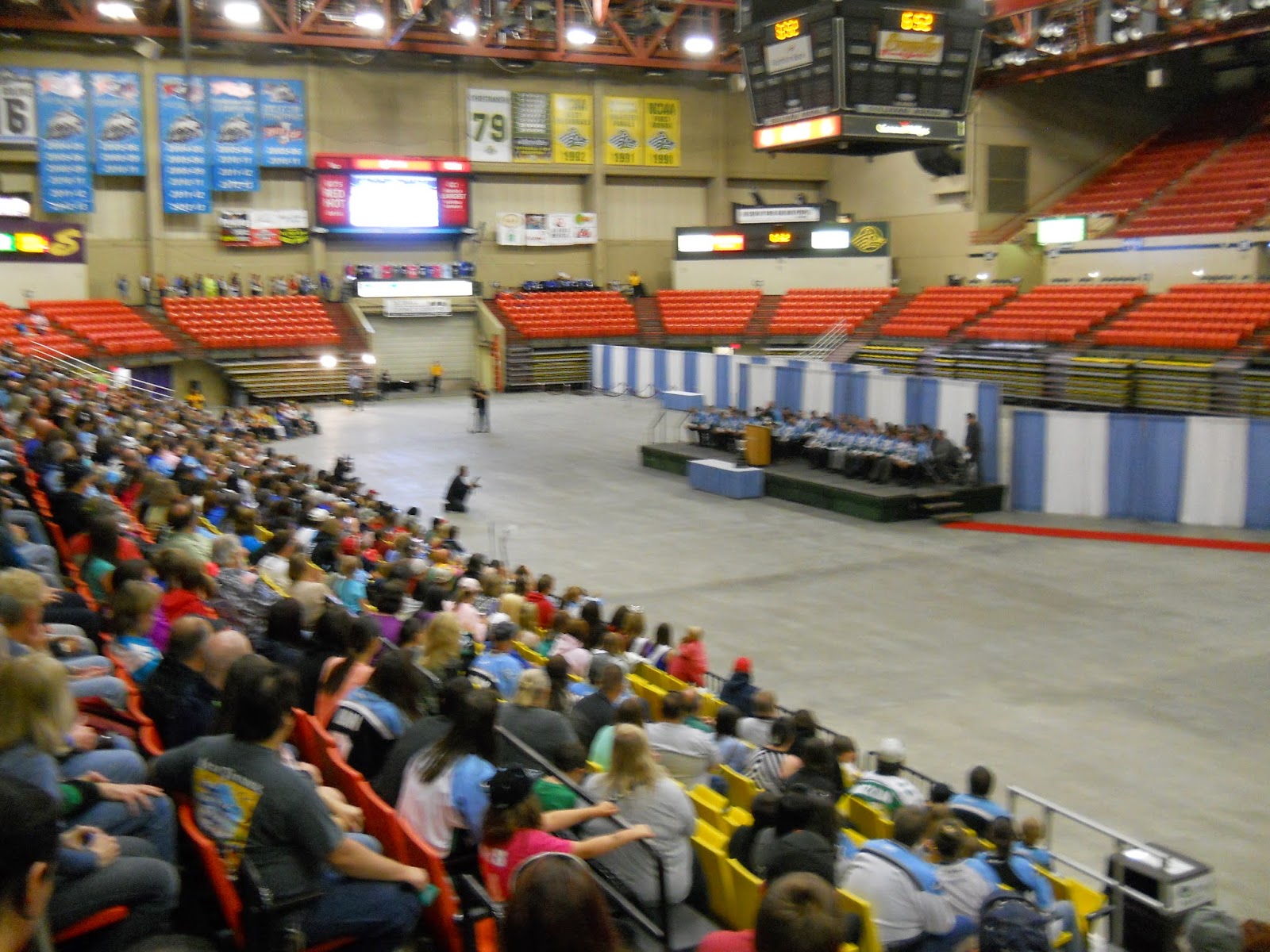 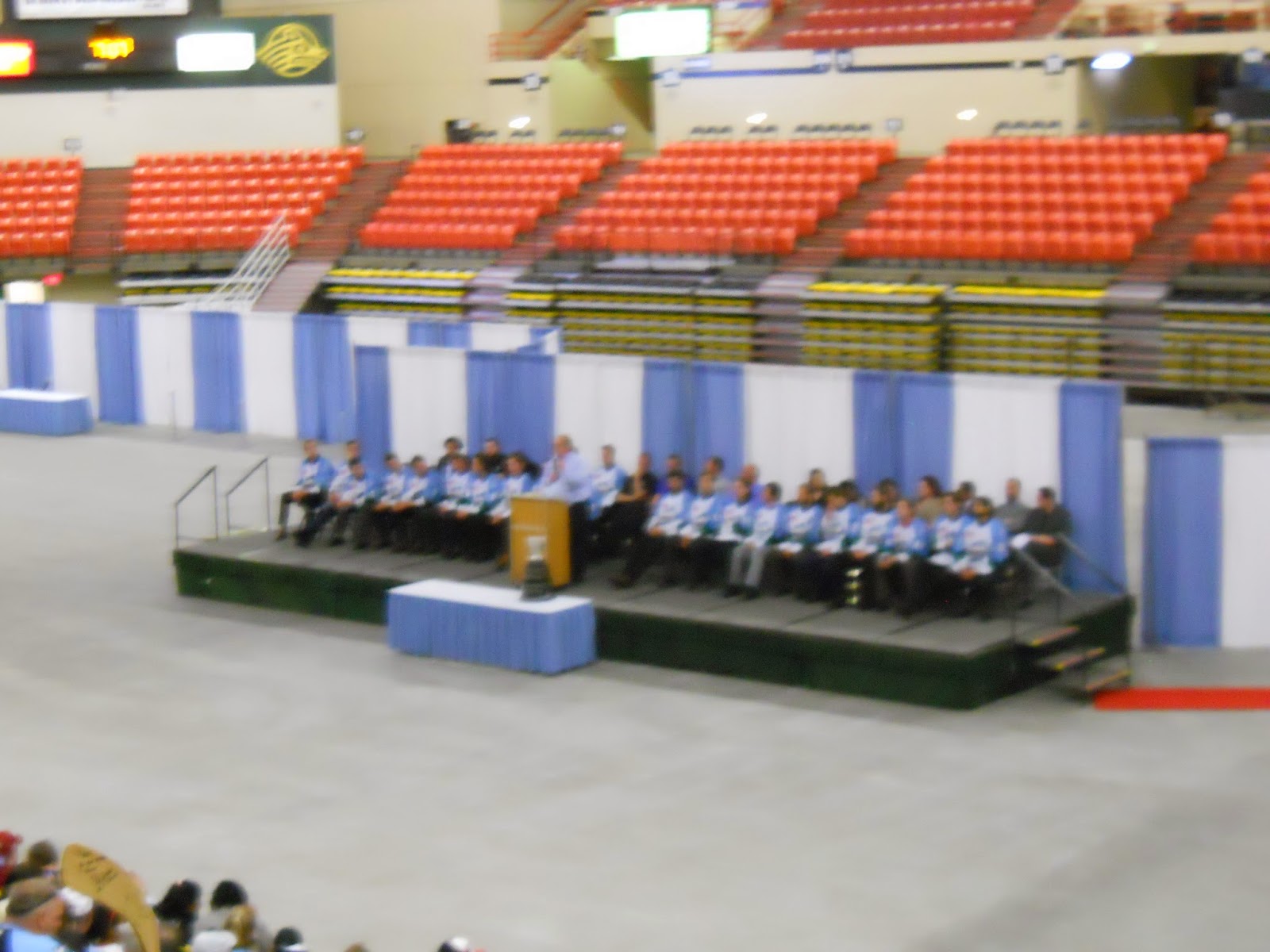 Well there-you-have-it loyal readers and followers of my web site.

As our Alaska Aces were winning the Kelly Cup up here in Alaska .. our good friend and loyal follower down in Southern California .. was rooting his LOS ANGELES KINGS ICE HOCKEY TEAM to victory and their winning of the STANLEY CUP!
Let's hear it for 'ZILLA! .. And for the Los Angeles Kings! 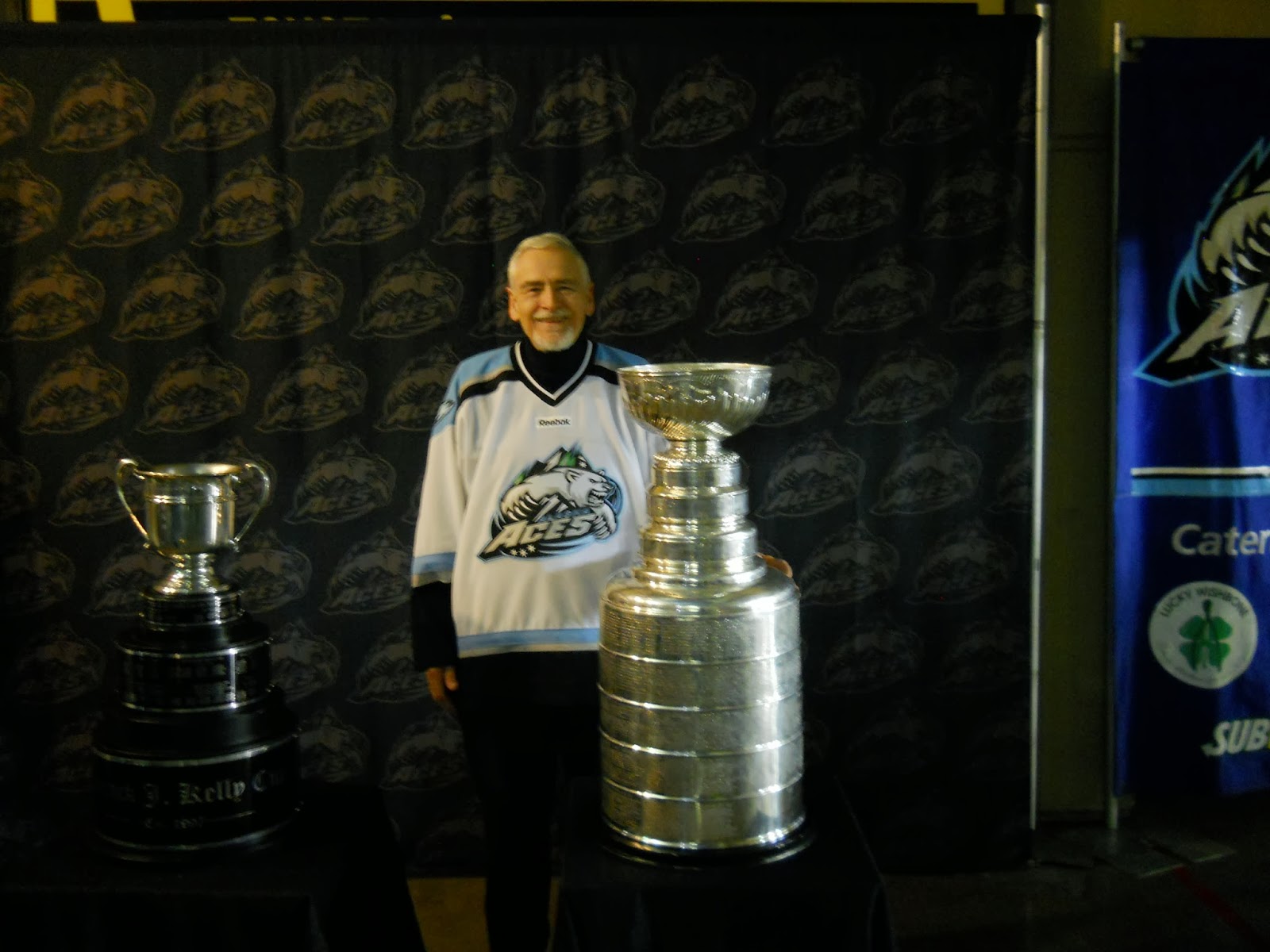 ﻿
﻿
In closing I realize that I have been on-again and off-again lately with my web-site here.  Mostly off-again.
THANK YOU ALL SO MUCH FOR 'HANGING-IN' WITH ME.
﻿ 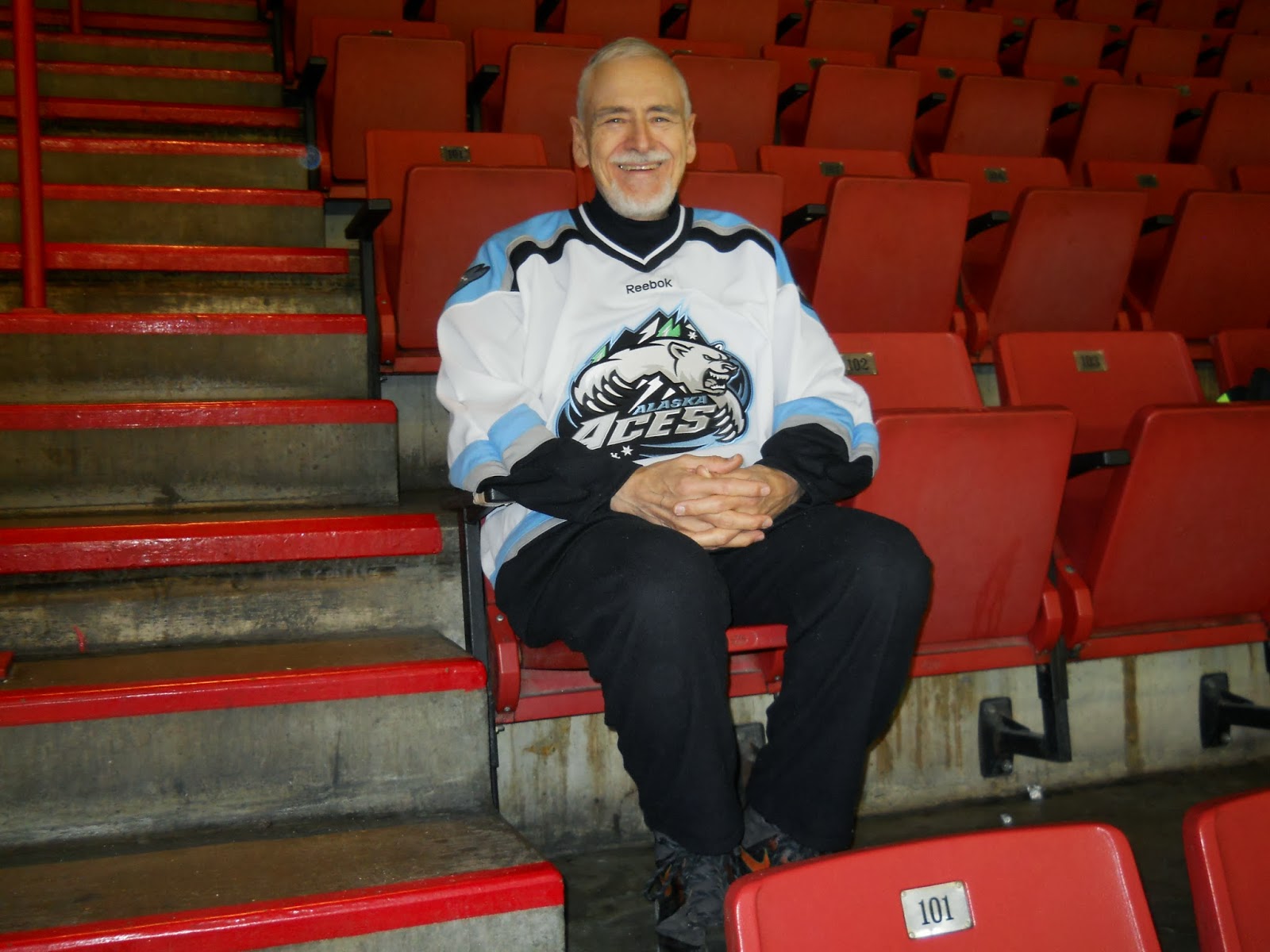 With much Joy and many Happy Thoughts to you all .. Cap ..
﻿
Please note .. lately it has been several weeks between each post.  As a result of this .. you may stop reading here at the end of the above post thinking that 'this-is-it' for now.
YESTERDAY .. 17 JUNE 2014 .. I posted a very special (second) post about D-Day with special memories sent-to-me by my friend-from-France .. Clement.  SO IF YOU HAVE NOT ALEADY READ YESTERDAY'S POST .. PLEASE CONTINUE DOWN to enjoy yesterday's post.
﻿
Posted by Cap at 17:32