In Arambol Beach there are some 'urban' legends about the 'Hidden Lake' behind 'the OTHER' Beach in Arambol Beach .. and .. taa-daa .. myths surrounding .. THE Banyan Tree .. so I decided to really explore them both ..

This other beach is named 'Sweet Water Beach' and you have seen it above in FWIW.. 115 and 116.. and in photo 5 of For What It's Worth.. 78.. November 27, 2011 .. and it is simply another beach you get to by going past the rocky point jutting out into the ocean at the extreme north end of the main beach at Arambol Beach .. and walking some distance to this next beach ..

Standing on 'Sweet Water Beach' ..in the below photo .. looking east inland .. you can see immediately in front of you the downstream end of 'Sweet Water Lake' a hidden lake inland from the beach and the ocean  .. notice the 'floats' to the left of the red flag out on the lake .. now we are going to walk (CLIMB) up the hill which is to the right of the below photo and look down upon 'Sweet Water Lake' .. or 'Hidden Lake' .. I see it called either .. the Banyan Tree you will see in photos 7 and 8 below is going to be ahead of us on the left side of the lake shown below .. this is primaily a fresh water lake NOT sea water .. thus the name 'sweet' water .. 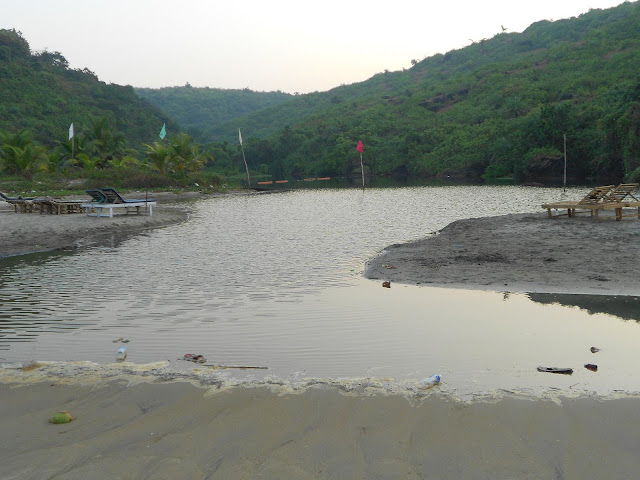 Below is a photo (taken Monday December the 26th) looking down upon the lake .. you can see the floats on the lake I mention in the photo above .. the building you see in the below photo is a beach restaurant .. and to get to the Banyan Tree we are going to walk beside this restaurant and follow the lake around its farther side (the north side) to the right and further past its head water entrance .. I was so exhausted after the climb to shoot this photo that I returned to my apartment and continued the Banyan Tree project on Tuesday the 27th .. but while up on the top of this 'hill' I shot several other photos you will see in FWIW.. 115 .. above .. 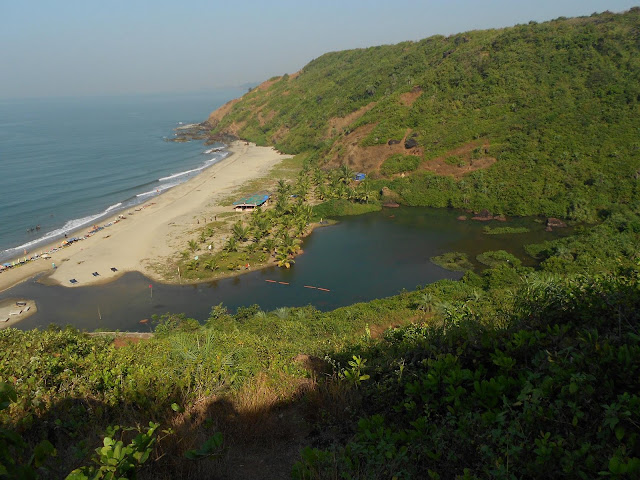 Although the below photos were taken the next day .. Tuesday the 27th of December .. I am showing them below since you can orient to them as described above.. in the two below photos we are walking through the 'jungle' so to speak .. to get to the .. taa-daa .. Banyan Tree .. 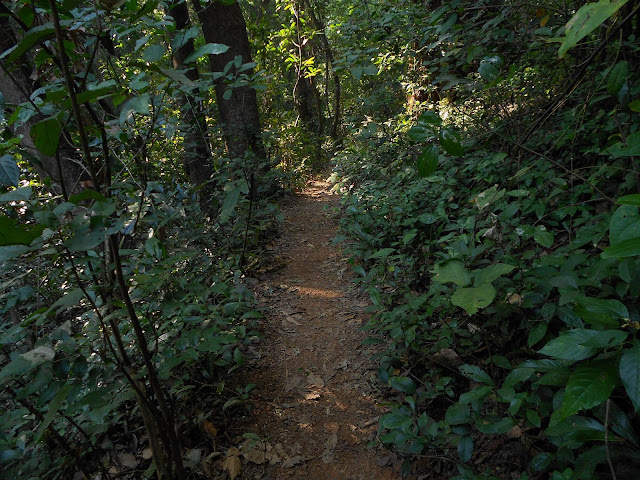 What these two photos do NOT clearly show .. is that we are climbing up and going down .. but the path is pretty clear .. the path on the climb to look down on 'Sweetwater Lake' was extremely difficult to ascertain for probably 40% of the way .. 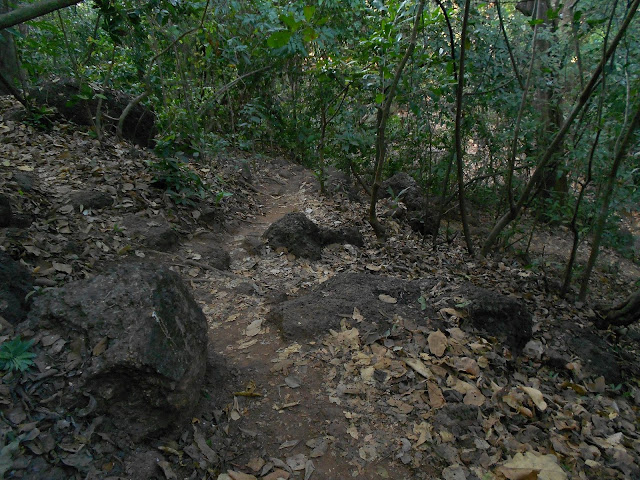 I could NOT resist photographing this magnificent stone bowl .. it is on the hill just below the Banyan Tree .. 'Give if you can' .. this too is FAMOUS locally and a part of the destination walking to the Banyan Tree .. 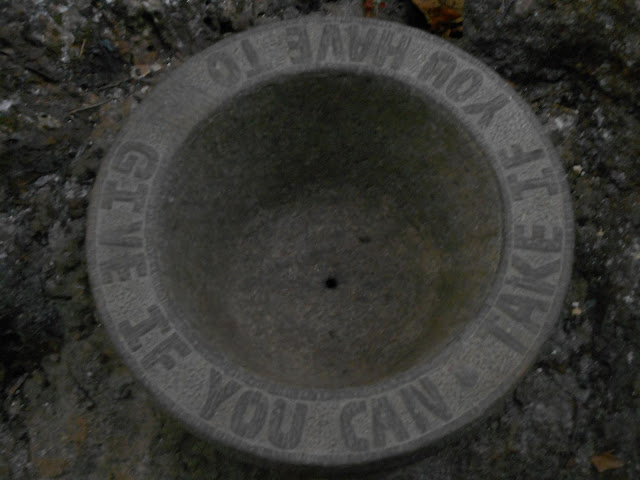 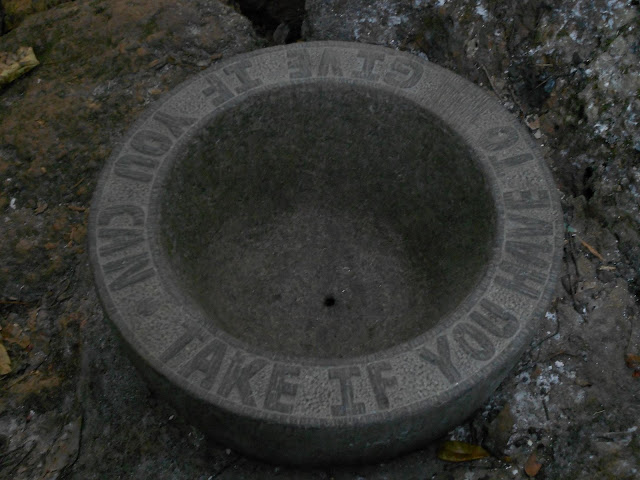 And below.. IF you can even begin to 'make it out' is the .. taa-daa .. fabled Banyan Tree .. in my humble opinion .. much ado about NOTHING .. I had expected it to be on the top of the mountain .. in a cleared open area .. and to stand .. solitary and alone .. in magnificent splendor .. instead it is mixed into the jungle and impossible to even ascertain where exactly it is .. and I was 'toast' after this climb also .. 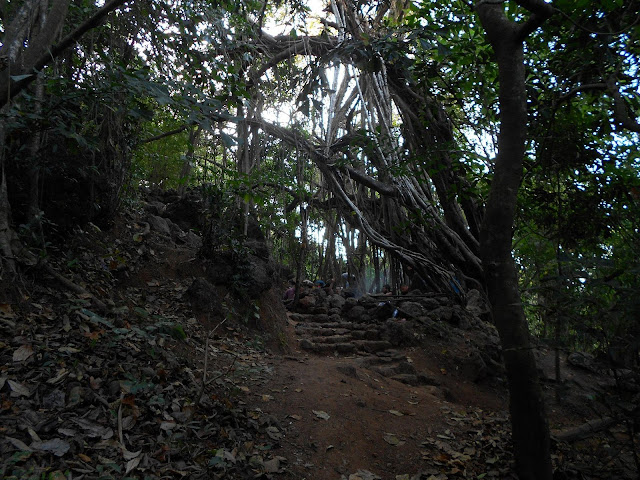 In Arambol Beach .. in almost every restaurant .. there are signs posted saying .. no smoking .. "Lovely" I thought my first day or two here .. then I found that everyone that wants to smoke totally ignores the signs .. then I learned that there is smoking .. and there is ..  s m o k i n g  .. in the above photo you see steps up into a clearing under the Banyan Tree .. in the below photo is a shot in the clearing .. 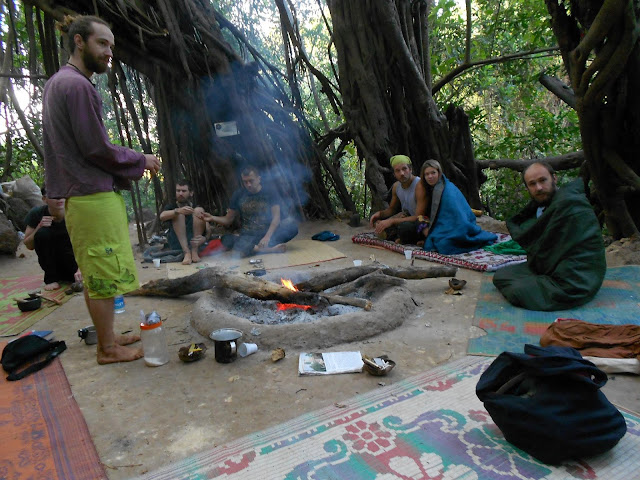