This is Patti and I am doing a post for Cap because he cannot get to an internet cafe in Chennai.

Cap had an excellent trip from Kodaikanal to Chennai in his Parveen Travel's air conditioned first-class-luxury bus which left Kodaikanal ON TIME at 7PM Monday evening.  The air conditioning was so efficient, he had to put on his down jacket and his red cap to keep warm! 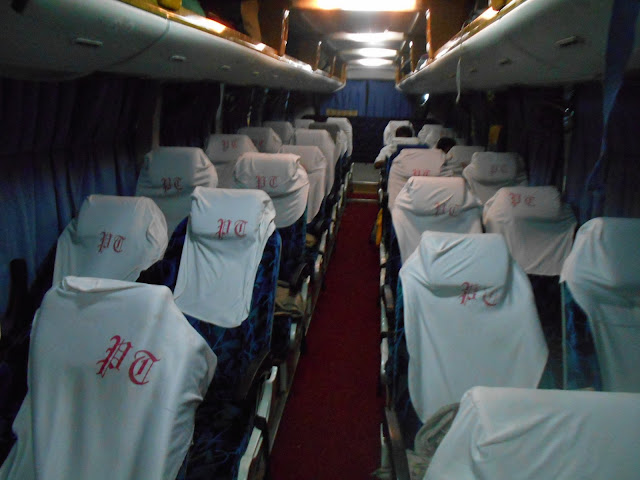 Cap felt he REALLY got what he paid for (800 Rs or $16.00 US) in first class .. both in comfort and enjoyment.  The bus had been due into Chennai at 7:30AM but was over an hour early arriving at  6:15AM.  This was critical because it enabled Cap to get from Parveen Travel in Chennai by Auto Rickshaw to the Chennai main railway station at 6:40AM.  So Cap was the first in line at the counter to apply for a 'retiring room'. 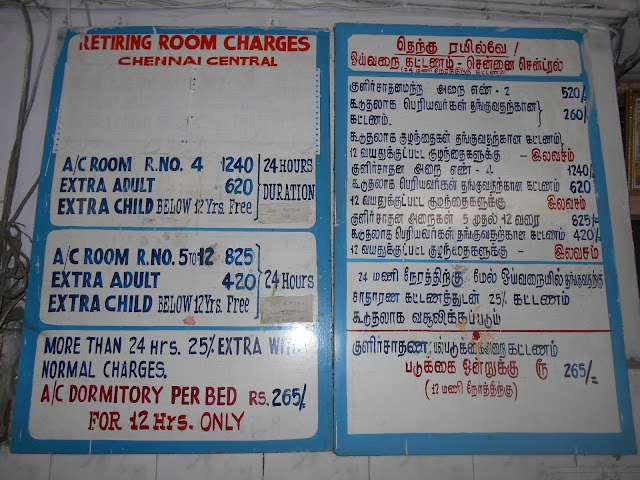 
Within India, many, if not all, of the major railway stations have what amount to 'hotel rooms' that are physically located within the railway station.  These rooms are called 'retiring rooms'.

Cap was twenty minutes early at the counter (see below left)  which was to open, and promptly opened, at 7 a.m and his receipt was stamped at 07:00:46 Hrs. 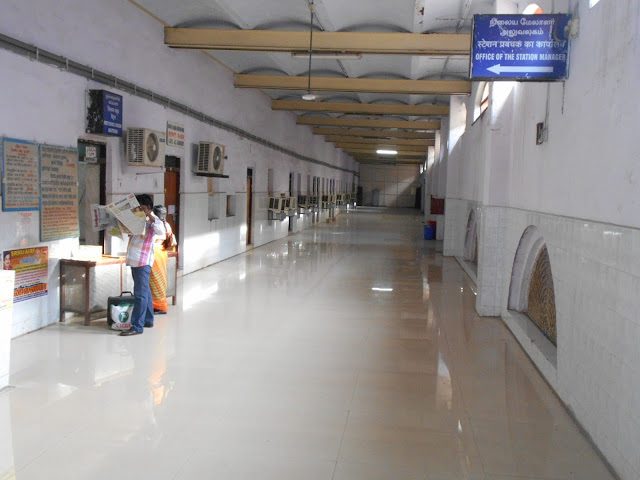 Just-in-case you do not notice .. go back and look again at the above photo! The 'retiring room' corridor is ABSOLUTELY IMMACULATE AND POSITIVELY SPOTLESS! The 'archways' on the right side of the above corridor look down onto the main waiting area for train boarding. Six photos below is a photo through the 'archway' directly opposite Cap's room.

Retiring rooms are generally difficult to get because there are not many of them and they are in high demand. In addition the 'retiring rooms' are usually assigned to families.

It has been Cap's experience, without exception, that these railway station 'retiring rooms' are very clean and equal to any medium priced moderate hotel rooms.  They are not chopped liver!  They are usually VERY nice rooms! 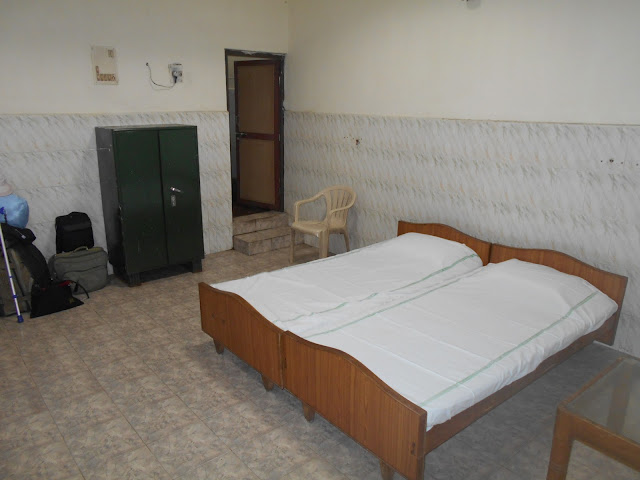 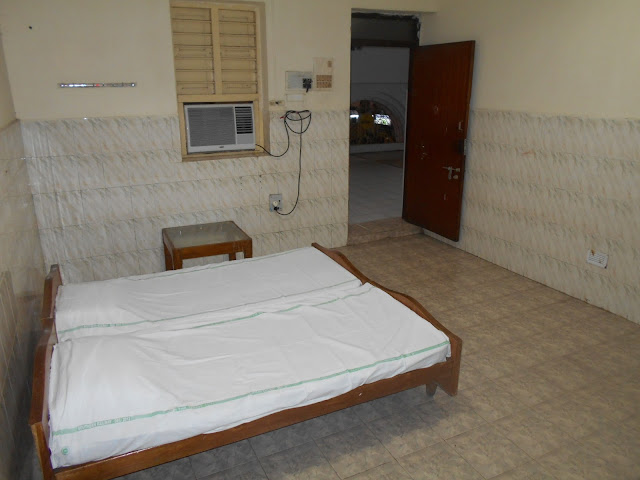 Cap's Room 5 is fully air-conditioned with two overhead fans. In one attached room is a western style toilet. 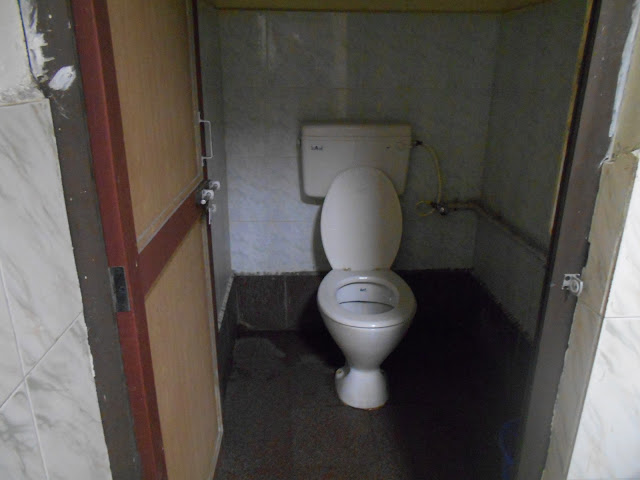 In a completely separate room with its own door .. a shower and wash room. 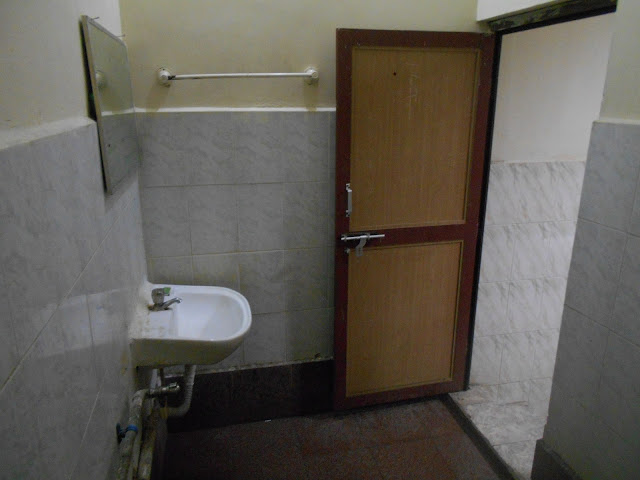 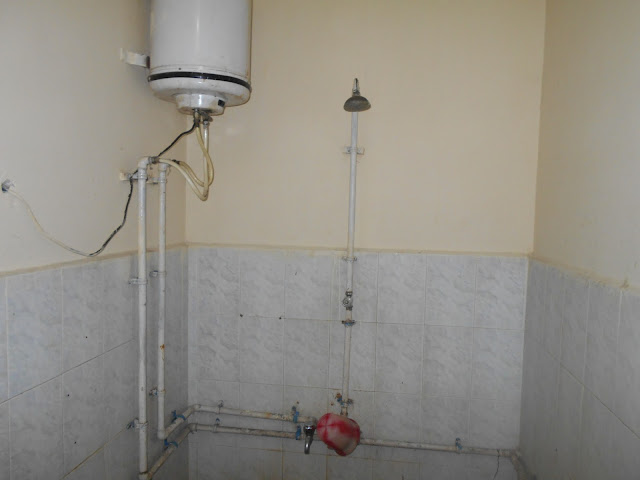 Cap is THRILLED with his room!  All he has to do is .. literally-go-down stairs and board his train .. The Tamil Nadu Express .. at 2200 Hrs. 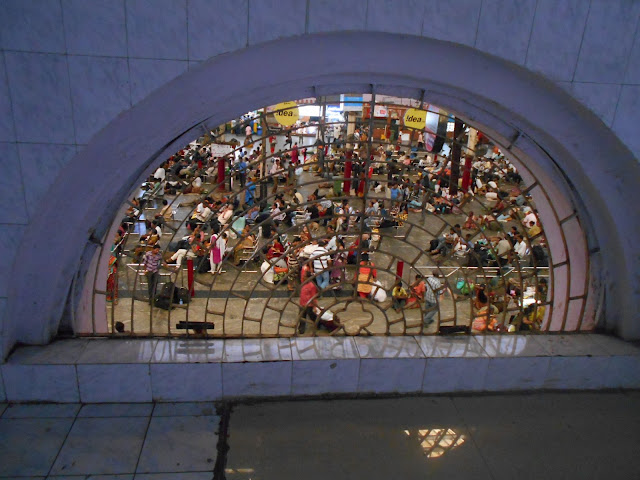 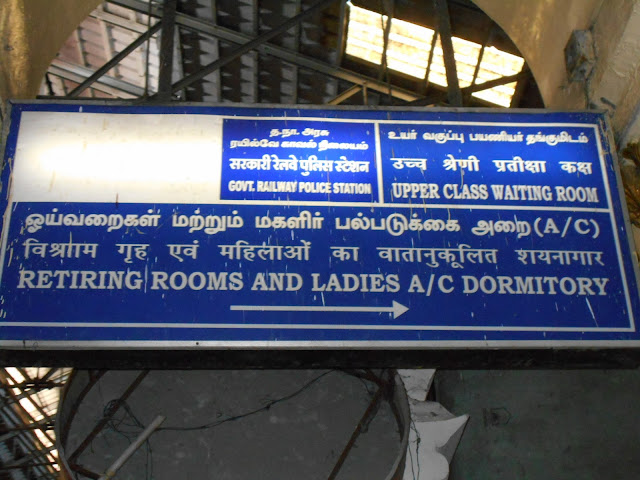 Cap had to 'trudge up three flights of stairs' to get to the 'retiring room' sign-in counter.

If you look closely at the three photos below you see .. First a flight of 18 stairs.  Then notice the 90-degree jog to the left and up a short flight of 6 stairs. Then way-up-in-the-far-distance notice a 90-degree jog to the right and up the final 17 stairs. It may-not-look-like much .. but after an all-night bus ride .. even in first class A/C .. Cap said it was 'daunting'! 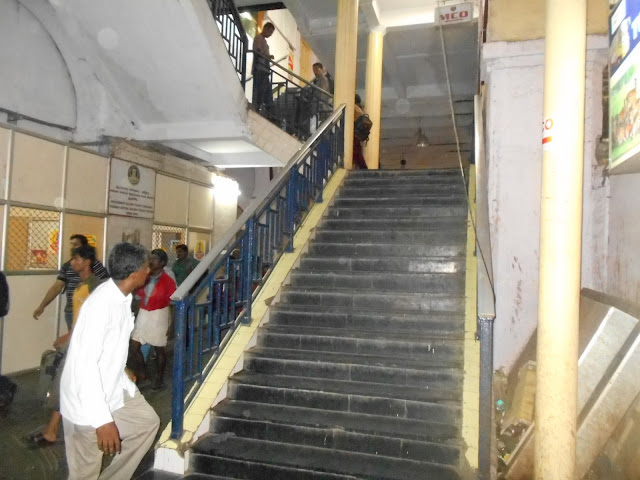 Looking back-down the stairs here we go down!  Down 17 stairs to your 90-degree left turn. 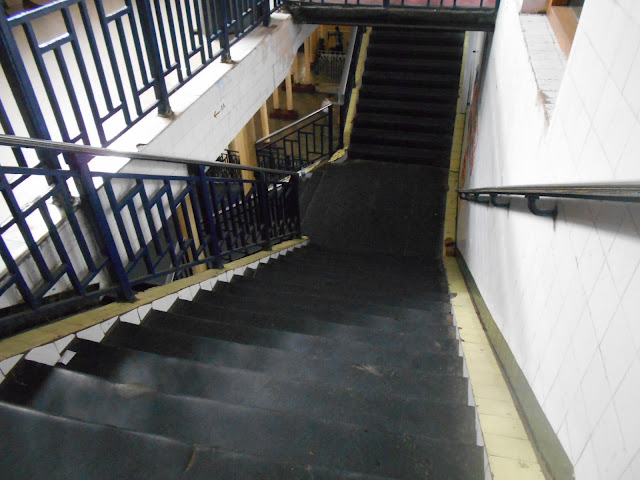 The jog to the left (as you go down) and 6 stairs. 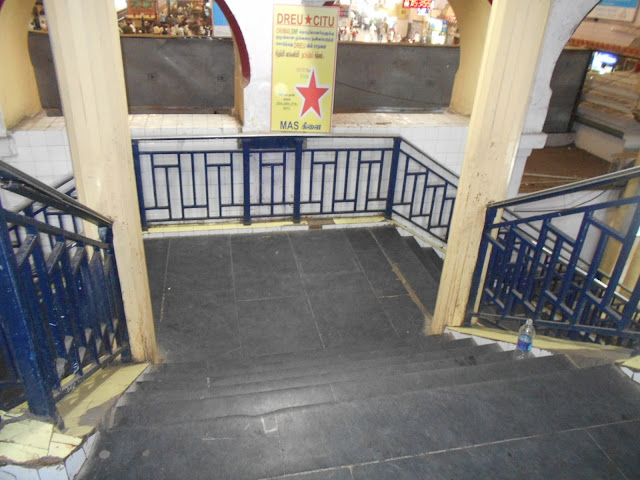 And lastly jogging to the right (or to the left) are the final 18 stairs down to the train boarding platform level. 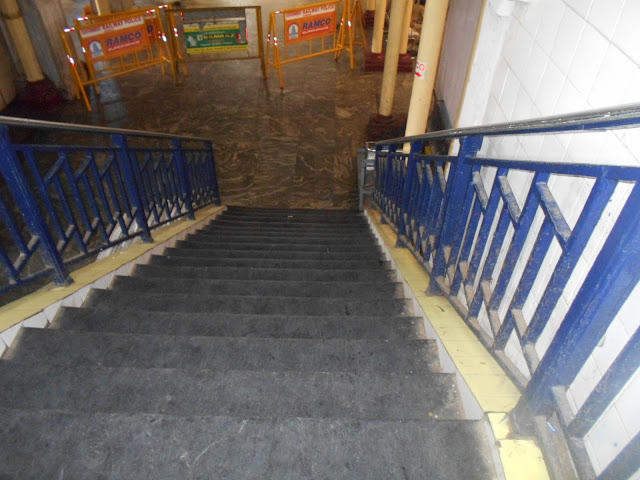 Cap is in an ebullient, high-spirited, joyous mood at his good fortune, sitting in his cool room ... because it is VERY hot in Chennai.

The Indian people that are able-to-afford to do so .. are paying for an A/C waiting room. 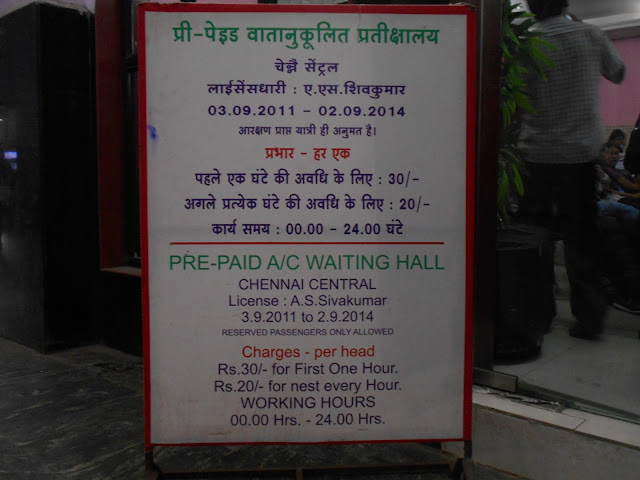 You must be able first to afford to pay the fee AND you second MUST have an upper-class train ticket as well.  The 'masses' can NOT go inside even if they have the money to-do-so! 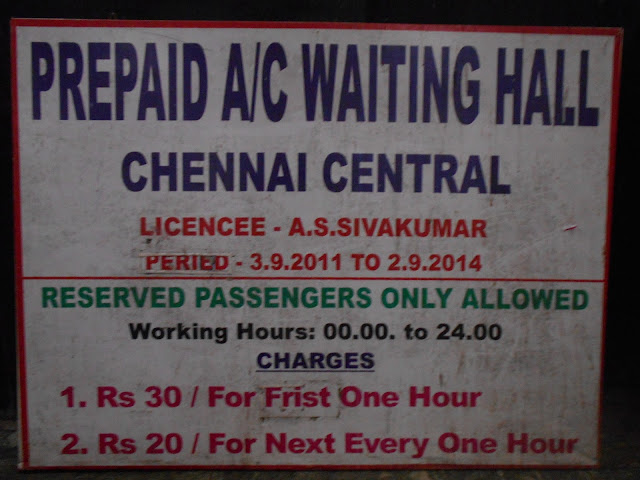 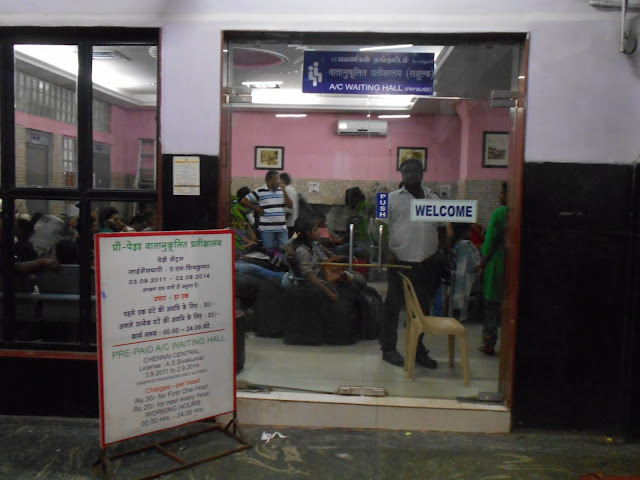 In the three photos below you see what 95% of the India Railway passengers do to 'pass-the'time' waiting for their trains.  And trust me .. it is HOT where these people are quietly and patiently waiting. 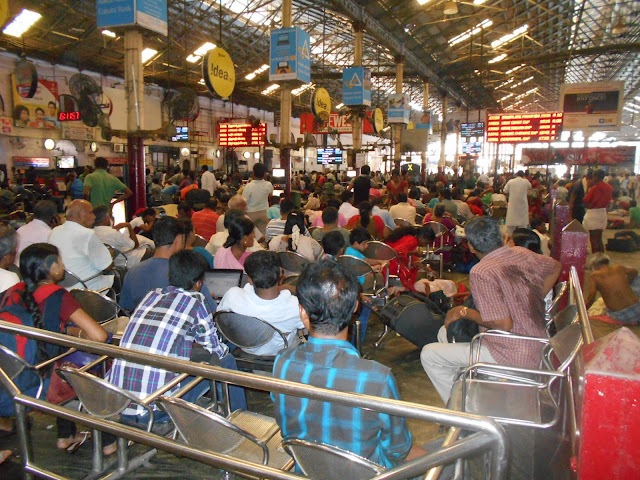 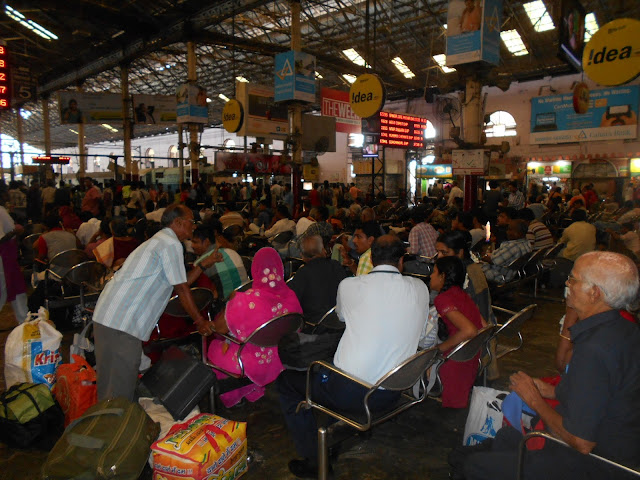 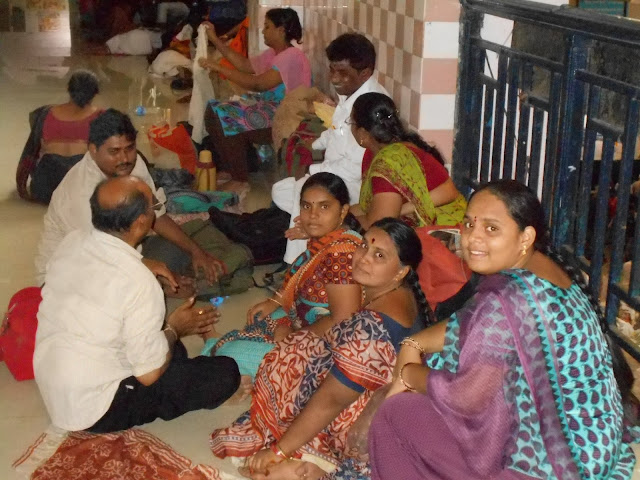 Signing off for Bobba and the Bobbseys ..(and with my own personal hugs) .. Patti

Wonderful bus ride notwithstanding, our Captain just took a three-hour nap!
Posted by Cap at 01:09