With this being a TRAVEL DAY .. I don't think this Post will be too long!

One of the MOST STRESSFUL things that I MUST DEAL WITH here in India are the ATM Banking Machines.

Sports Fans .. ALL OF US MUST HAVE MONEY!  No argument on this fact-of-life!

At home it is far less critical because .. for one thing .. I think our banking system and its hardware (the ATMs) are very good.

OH NO! YOU DO NOT EVER WAIT TO DO THIS ON A TRAVEL DAY unless you want to risk heart failure! .. I set out to get some cash for my trip tonight.  I had two full days plus .. worst case scenario .. today a third day to get money.

Trust me on this: I know the banks and I know their ATMs here and in every place I stay.  So off I trot to MY first choice local bank. A major bank that I have been using.  I KNOW my card works there. 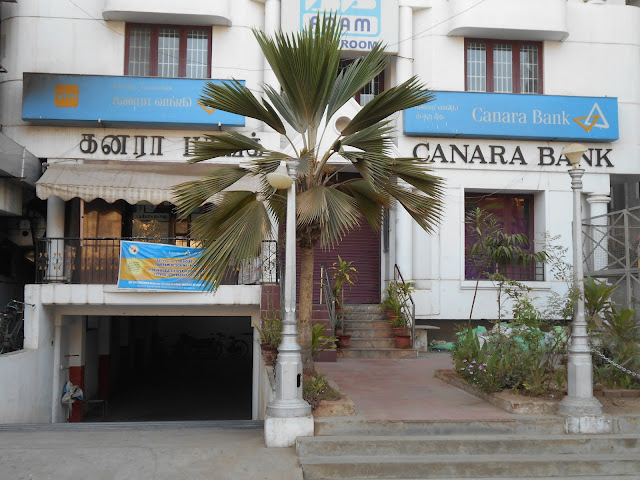 The ATM accepted my card and whirled and sputtered and did NOT dispense me any money.  At least the receipt showed Zero funds given.

This has happened quite often .. so undisturbed ..

Off to MY bank number two I 'strolled'.  At this point I was 'strolling' about my ATM business. 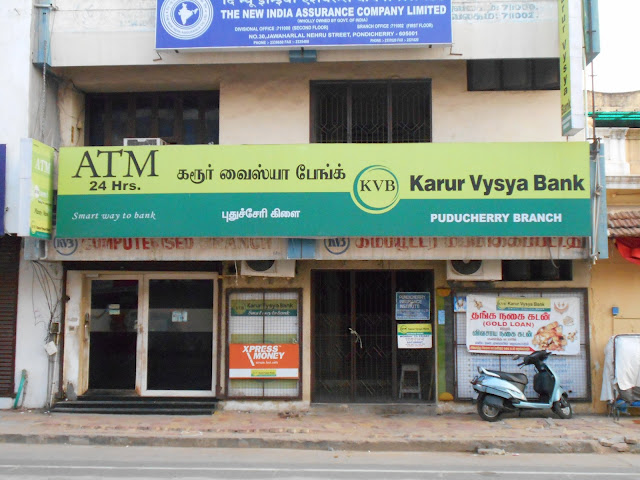 Well at this point I begin to 'fret' a little. Has something happened to my ATM Card?

Off to MY bank number three I trot.  'Strolling' just went-by-the-wayside! 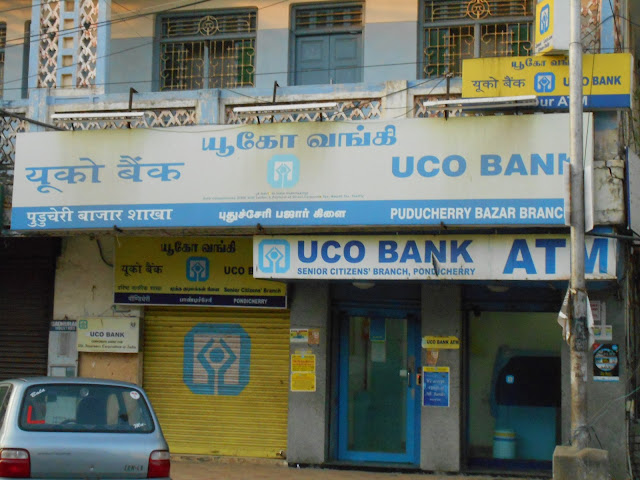 By now the palms-of-my-hands are getting a little 'sweaty'!  I have gone to THREE known-to-me banks that have accepted my ATM card and dispensed money during the past month.

I am always very careful to use several banks to establish my ATM card in any location.

MY PARANOIA is rising!  Has the All-India ATM Banking System GONE DOWN!  Has my ATM card been rendered null-and-void.

'Zilla I have four (4) count-them different ATM cards with me on the trip!

So now I am standing at a fourth ATM machine.  It is only Monday .. and too early to get really upset BUT I am kind-of-sort-of-upset!  I do NOT like this 'drama'. 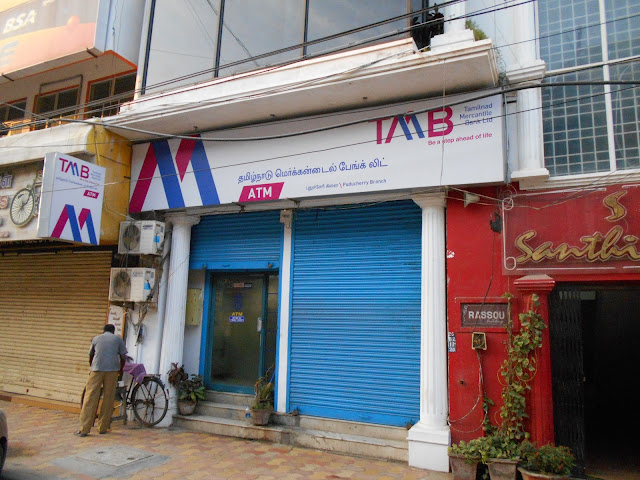 Strike Four Captain!  No money. And I have tried the four banks that are in-the-vicinity of my Guest House.  All banks that I have done ATM transactions with!  And frankly I do NOT know of another bank in my area.

I have now put about thirty minutes into this adventure and it is hot and I am hot. And I start walking .. looking for another ATM. After about ten minutes of wandering-in-search-of-another ATM .. I spot an elderly and very respectable-professional-looking gentleman!

"Sir could you direct me to an ATM?"

There they both are!  Two major banks on-the-corner! 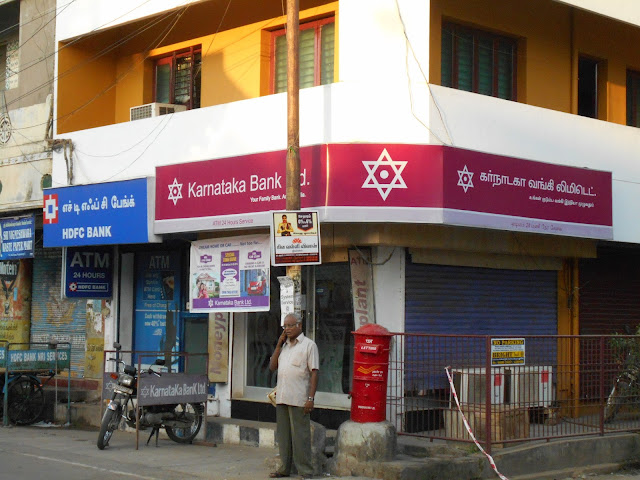 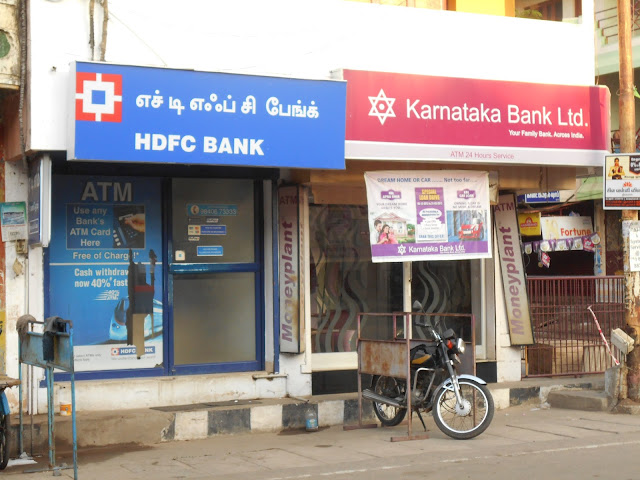 I immediately went 'next door' to the Karnataka bank.  No guard but very good air conditioning!

For now .. for last Monday .. end-of-crisis .. Oh Yes!  The next crisis awaits me somewhere up the road.

'Zilla I try to ALWAYS keep a reserve-on-hand of 5,000 Rs Indian cash.

Last February of 2012 .. an ATM dispensed to me 10,000 Rs Indian money and INSTANTLY WITHDREW MY MONEY BACK INSIDE THE ATM MACHINE.  That ATM machine was adjacent to / and owned by a bank with a full-office beside its ATM.

So I went into their office and was told ..

"We don't service the ATM!  You must telephone your own bank!"

"My bank is in the United States!"

"You must telephone your own bank!"

WITHIN TWELVE-COUNT-THEM-MINUTES I was called in India on my cell phone by a Charles Schwab Bank representative and told that .. "This happens all the time!  Don' worry!  We will take care of it!"

Many ATM machines (below is a photo of one of them) are free-standing with NO bank branch attached.   I tend to shy-away from these free-standing ATMs! 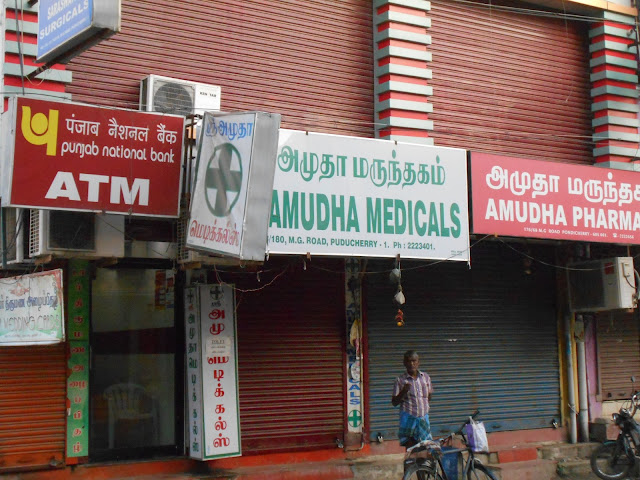 With my respects to the little fellow above .. would YOU use him!

Sports Fans .. forgive me .. I am getting more-than-a-little paranoid about India's ATMs!

Well you all got to see some photographs of Banks!

Time to get serious about packing. Smiles .. Cap ..

Enough Banking!  Scroll Down for your Daily Salad!