Since I spend so much time here at my internet cafe .. I updated this Post that I published on 1 March 2013  because below I have inserted four new photos of the interior of my internet cafe.

IF for no one else .. I want Patti to get a better idea of MY place here!

Once in awhile .. and it happens .. I get something that is very important to me 'JUST RIGHT' !

In addition to showing you where I do all of my Posting .. This post tells you a story that happened last January of  2012.  Its message is still important!  One I can not and do not want to forget!

As you know .. I spend hours and hours on-line updating my two web sites.  In the first photo below is a photo of the internet cafe here in Pondicherry where I practically ' live'.  This one particular internet cafe is the absolute best that I have found here in 'Pondi'.  The 'Citinet Internet Services' cafe. 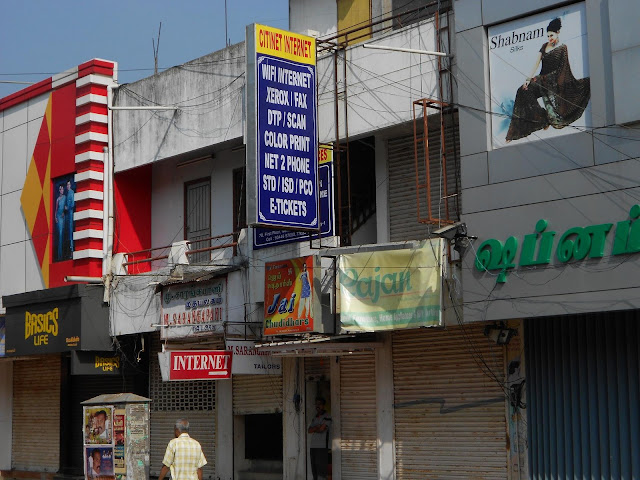 At this internet cafe, the main man .. the actual on-location manager .. is named Thangavelu.  He goes by 'Velu' and his name means 'fish' according to him.   After coming to this internet cafe awhile in January of 2012 .. Velu .. for no reason that I can pin-down .. began to let me use his personal computer .. the best-computer-in-the-place!  Velu's computer has a super large screen and the absolute most up-to-date software!

To put it mildly .. Velu treats me extremely well!

So in a very real sense I owe Velu.   As you can see in the below photo .. Velu is a VERY PLEASANT YOUNG MAN .. his photo just exudes this! 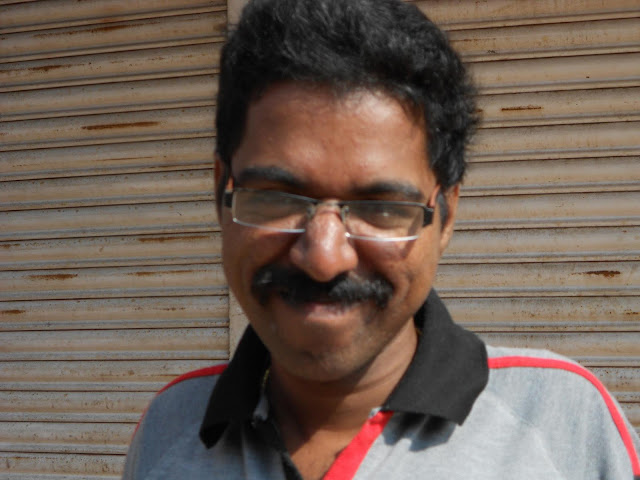 Late in January of 2012 .. as I was entering the cafe .. out-of-the-blue ..  Velu hit me with the following!  "Sir you owe me 100 Rupees.  You left last night without paying for your two and one half hours of computer use!"

Most of you know the workings of our minds .. in nano-seconds we seem capable of running tens of thousands of thoughts .. or so it seems!

Here were some of my nano-second thoughts!

I always pay at the end of my computer sessions without fail!  Velu .. as the responsible manager that he is .. makes sure everyone pays when they leave!  This is his job and he does a good job.  The entrance and the exit are set up to prevent people from skipping out!  Velu is always very precise with our times!  Everyone is promptly logged in on Velu's time sheets.

Then without blinking I came up with the following ..

"Captain" .. I thought to myself .. "What are we talking about here?"  .. "We are talking about TWO American Dollars!"
"For TWO Dollars why on earth risk Velu's friendship and in  the slightest way annoy Velu!?"

I DID JUST THAT .. with a smile I said .. "Sure Velu!" .. and with absolutely no further discussion I said as I handed the money to him .. "Here is one hundred Rupees" ..

I am absolutely positive that Velu had NO idea of my thoughts!

Below are six photos (the first two are of me) shot inside of Velu's Citinet Internet Services cafe.  In the first one .. you can see the very large screen on Velu's 'HP' computer. 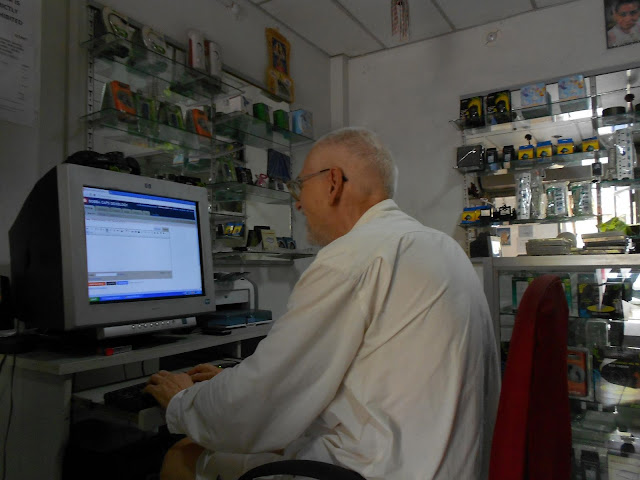 And another from the side.   Not the best photo as  it is dark in the cafe.  Velu shot these two photos for me. 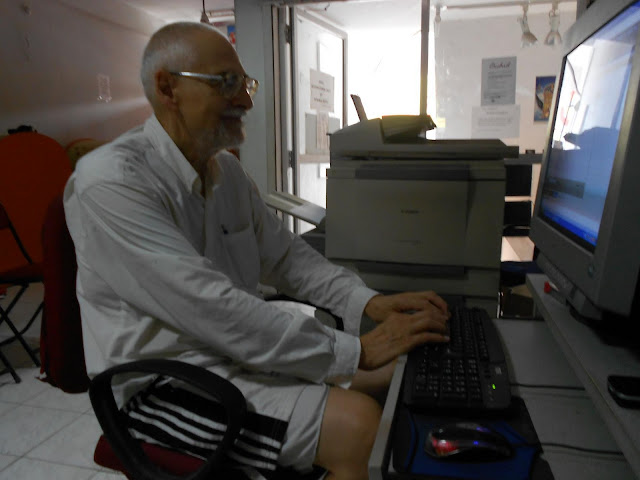 A year has passed with little or no significant difference.

Below is a photo of Velu's desk and on the left the door leading to the steps down to the street below.  On the right side of the below photo is Velu's personal computer.  THIS is the computer that I use when I am here. 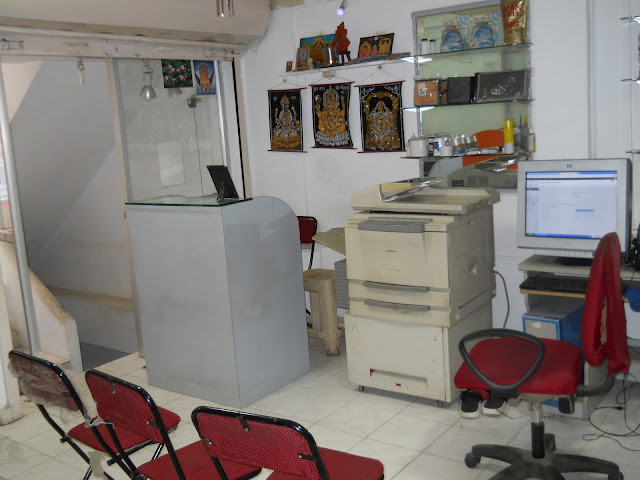 The below photo looks straight at 'my' computer (the use thereof being 100% the courtesy of  Velu!) 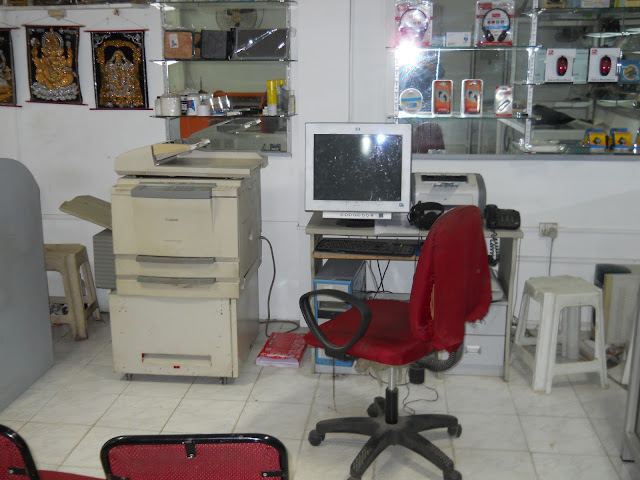 In the below photo .. IF you turn 90-degrees to your left .. you will see the scene in the last photo below. 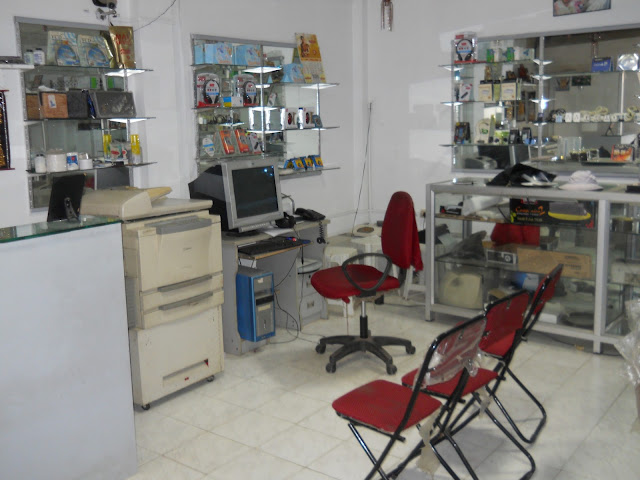 The final photo below shows the main area of computer use.  My area is to the right diagonally behind us in the below photo.  After Velu's personal computer .. although I seldom use it .. the one on the immediate below left is the next best computer. 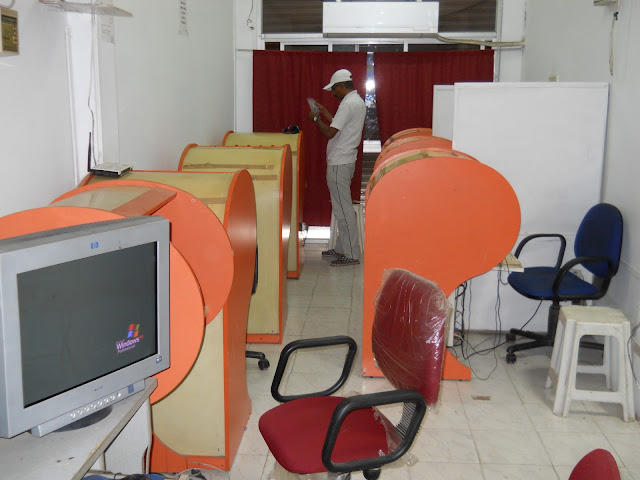 As a result of my behavior .. there is absolutely no tension between me and Velu !

Over a full year has passed.  When I came here on February 21st Velu lit-up-like-a-Christmas-tree when he saw and recognized me!

And for two dollars I would have risked our entire relationship?